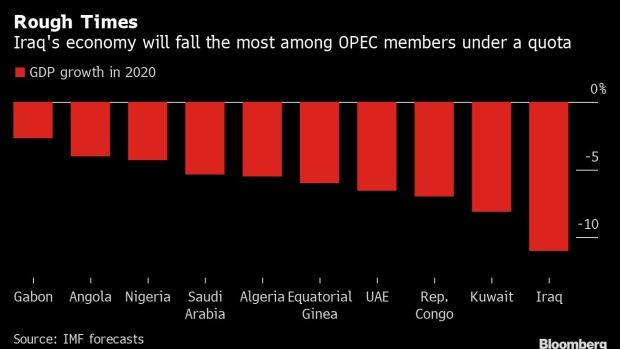 Residential and commercial buildings stand in Erbil, Iraq, on Sunday, March 10, 2019. Gulf Keystone Petroleum Ltd. said it will spend about $91 million developing the Shaikan oil field, near Eribil, in 2018 and around $200 million in 2019. Photographer: Jason Alden/Bloomberg , Bloomberg

(Bloomberg) -- Iraq’s currency devaluation will add inflation to the list of hardships facing a population recovering from a devastating war with Islamic State. Without deep spending cuts, it won’t be enough to prevent even deeper economic pain.

The government announced Saturday it was devaluing the currency for the first time since the U.S.-led invasion in 2003, lopping off 23% of the dinar’s value to reduce pressure on public finances as it tries to secure billions of dollars in foreign aid.

But the move, part of a broader plan to overhaul Iraq’s oil-dependent economy and trim its bloated public payroll, has already met opposition among parliamentarians fearful of further angering constituents after mass protests shook the country last year.

So far, the devaluation hasn’t triggered a repeat of that deadly unrest in OPEC’s No. 2 producer, and the government has said the devaluation would be a one-off. Economists are predicting it’s just the beginning of a painful adjustment.

Though Iraq is the world’s third-biggest oil exporter, its economy suffered as the coronavirus pandemic sapped global demand for energy supplies. Quotas agreed with other oil exporters to stabilize the market also mean the number of barrels Iraq can pump is restricted, narrowing its options for raising revenues.

According to the International Monetary Fund’s latest estimates, Iraq’s economy contracted 11% this year. That’s better than the fund’s initial projection of a 12.1% drop, but still leaves Iraq with the steepest contraction among OPEC members subject to production caps, highlighting its over-reliance on hydrocarbons.

The IMF forecasts that Iraq’s net foreign assets will continue dropping sharply into 2024. Its debt-to-GDP ratio is among the highest in OPEC+, a grouping that includes non-OPEC oil exporters such as Russia.

A draft of the nation’s 2021 budget leaked before the devaluation and seen by Bloomberg foresees another difficult year. It estimates oil exports of an average 3.25 million barrels per day, at an assumed average price of $42. That’ll leave a budget deficit of about 58 trillion dinars ($45 billion).

The budget plan, approved by cabinet on Sunday but yet to be passed by parliament, prices in support from the IMF worth around 6 trillion dinars, a fraction of the gap. Many analysts said the devaluation was necessary to prove to international lenders that Iraq was serious about reform, but insufficient to unlock the aid the government wants.

Since the devaluation was announced, the gap between the peg and the black market currency rate narrowed, suggesting the adjustment has helped ease pressure for now.

But the government, formed after last year’s protests forced out former Prime Minister Adel Abdul Mahdi, remains fragile. Now it’s battling opposition to plans to roll back the public sector in a country where politicians have for decades bought loyalty by providing government jobs.

“They are going to have some issues with passing the reforms in the budget through parliament,” said Ahmed Tabaqchali, chief investment officer for Iraq at Asia Frontier Capital and Adjunct Assistant Professor at the American University of Iraq - Sulaimani. “But they’ll have to contend with it.”