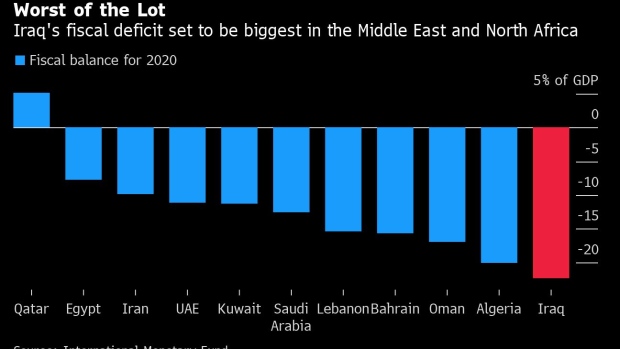 (Bloomberg) -- Iraq is in talks with the International Monetary Fund for a loan and is seeking Saudi investments in its natural-gas fields, as Baghdad tries to bolster its battered economy in the face of the coronavirus and low energy prices.

The IMF and Iraq are in “intensive” negotiations about a loan that would probably be a maximum of $5 billion, Ali Allawi, the OPEC member’s finance and deputy prime minister, said in an interview in Baghdad on Tuesday night. He didn’t specify if Iraq wanted a rapid credit facility, which would come with few strings attached, a conditional line or both.

Saudi Arabia has expressed interest in Iraqi gas projects, Allawi said. Iraq’s government has proposed that the Saudis put money into the gas field of Akkas in the west or Mansuriya in the east. They could also invest in capturing gas from the southern oil deposit of Ratawi, according to Allawi.

“Saudi Arabia has a high readiness to back our energy projects,” he said. “At the end of the day, they will pick one field. They are also interested in solar energy.”

Allawi, who traveled to Saudi Arabia and Kuwait in late May, ruled out getting budgetary support from either country. Iraq still owes Kuwait about $2 billion in reparations for invading it during the Gulf War of 1990-91, and has sought debt relief in the past.

The IMF and Saudi talks come as Iraq tries to shore up its finances. The economy will probably contract 7% to 9% in 2020, Allawi said. That’s more than the IMF’s forecast of 4.7%.

Riyadh is pressing Iraq to cut oil production sharply to meet its OPEC+ quota, adding more pressure on Prime Minister Mustafa Al-Kadhimi, who came to power in May. Baghdad initially refused to curb output as much as other OPEC+ members, but relented after intense lobbying from Saudi Arabia and Russia.

Iraq exported about 3.32 million barrels a day of crude last month, down 7% from May, according to Bloomberg tanker tracking. Still, that would have left only 275,000 barrels daily for domestic refineries if it was to meet its overall production cap for June of 3.59 million barrels. Last month, Iraq kept 600,000 barrels a day for its local market.

The production quota was agreed between the Organization of Petroleum Exporting Countries and their partners in April.

The budget deficit will hit 22% of gross domestic product this year, higher than anywhere else in the Middle East and North Africa, according to the IMF. The government will not issue new Eurobonds to fund the gap because it would be too expensive, according to Allawi.

Yields on the nation’s $1 billion of notes maturing in March 2023 dropped almost 60 basis points on Wednesday after the news of the potential IMF loan. But at 9.54% they’re still the highest of any Eurobond issuer in the Middle East aside from Lebanon, which is in default.