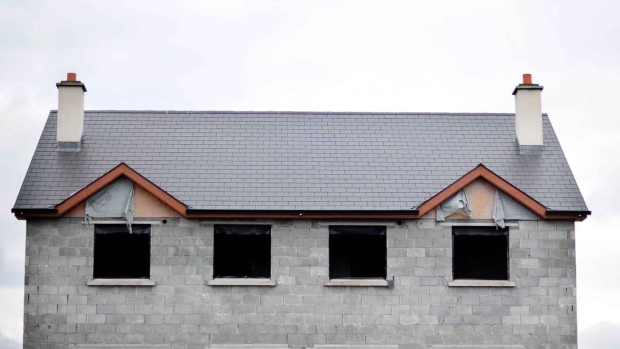 (Bloomberg Markets) -- It was the tie that gave it away. I was near the headquarters of Anglo Irish Bank in 2008 when I bumped into Paddy Kelly, one of Ireland’s biggest developers, and his son Simon. The Irish property market was in meltdown, but it wasn’t clear yet that we were heading into Western Europe’s biggest real estate crash.

“Things must be bad if you’re wearing a tie,” I joked to Paddy, who was famous for avoiding them.

The Kellys had just been to Anglo to get an extra credit line. In the space of 12 months, their Redquartz group saw net assets of €300 million ($341 million) become net debts of €200 million. Their fate was emblematic of Ireland’s. The crash toppled the economy into recession and led to a €67.5 billion bailout by the International Monetary Fund and the European Union.

And that was just the beginning of the story.

It’s been 10 years since the Irish government nationalized now-defunct Anglo, the bank of choice for Irish developers such as the Kellys because of the speed and laxity with which it handed out money. I’ve been catching up with some of the most prominent players in the property industry collapse to find out whether another one could happen. The answer is yes. What’s more, the culprit is soaring residential land prices, which were a cause the last time around, leaving half-completed housing developments dotted across the country like tombstones.

Paddy and Simon were the first people I met on my journey. On the plane over from London, I’d seen an ad in an in-flight magazine for the sale of Clonmore, the family home. Paddy had built the six-bedroom house, with its pond and flood-lit tennis court, on Dublin’s priciest street, Shrewsbury Road. With the market imploding, Paddy rented it to the Chinese ambassador. Now he was asking €10 million for it. Only one serious bidder came forward, and Clonmore sold for almost 20 percent below that in December.

Ten years after Paddy told the courts he was effectively bankrupt, the Kelly family is still working out their loans. They were the first of Ireland’s major developers to admit they’d lost everything. Instead of taking cash off the table during the boom, they’d reinvested the profits: a hotel at Sawgrass Golf Resort & Spa in Florida; Dublin office buildings (since leased to companies including Amazon.com Inc.); the former athletes’ village for the 2006 Turin Winter Olympics (now a Club Med ski resort). They lost them all.

“We totally bought into Ireland’s growth story,” Simon says. In Dublin, sleek bars and restaurants proliferated. Helicopters, yachts, mansions in Spain—these became almost everyday accouterments to the lifestyles of the rich and Irish. “That’s why we didn’t get out. You believe the local narrative, and then the story whips you in the ass.” As the economy buckled, Simon ended up writing a newspaper column for me at Ireland’s Sunday Tribune in which he apologized for the “damage” the developers had caused.

Paddy is a serious believer in reincarnation. Which is good, because he says he’s ready to start again. The family’s debts are now owed to U.S. real estate investment group Colony Capital, and he’d like to see if he and Colony can build a business together. Buying residential land won’t be on the agenda, though; instead, he was considering shorting Irish homebuilder stocks because of the eye-watering prices the companies have been paying for land. “You have to get your timing right,” he says. “The property market quickly becomes sour bread.” He switches metaphors, clinging to hope: “The party ended at midnight, and now it’s 2 a.m. and there are still some stragglers hanging around.”

From the early 1990s through the early 2000s, rapid economic growth, propelled by an influx of tech companies and a burgeoning young workforce, changed Ireland from a grim place of emigration to one of immigration and virtually full employment. A property boom followed: The country’s population rose almost 20 percent in the decade through 2008, boosting demand for homes, stores, and offices. Successive governments used taxes from property sales to fund long-term spending, much of which went into wage increases that, in turn, were plowed into ever more expensive real estate.

Ireland became addicted to construction, which made up a quarter of gross domestic product in 2007, so when the bubble popped, the economy sank like a stone. From 2007 to 2010, unemployment trebled, to 15 percent; home prices fell by almost half.

When you’re looking for a bubble in property markets, you keep an eye on land prices. They’re based on “hope value.” The amount of money developers bid is based on what they think the homes will sell for when they’re built. That speculation was at the root of Ireland’s property crisis. In the two years through June 2007, land prices in Dublin’s high-end Ballsbridge neighborhood rose as much as 150 percent. When the bust came, land values plummeted more than 90 percent in some cases, because nobody wanted to risk building homes in a downturn. Most of the developers who spent big money on land in Ballsbridge lost control of it, and it sat idle for years.

So it’s no wonder nerves started jangling again a few years ago. Thanks to a weak euro and expansion by tech companies such as Facebook Inc. and Alphabet Inc. that were attracted to Ireland’s favorable tax regime, the economy began recovering in 2013. Ever since, home values have been roaring back as if the last crash never happened. House prices rose almost 80 percent between their trough in 2013 and the middle of last year, according to government statistics. There’s been a corresponding surge in urban land prices: Despite the eerie presence of hundreds of unsold or abandoned “ghost estates” dotting the Irish countryside, shortages of homes in cities such as Dublin or Cork have spurred demand for land on which to build rental housing.

This worries Brendan McDonagh. He’s the head of the National Asset Management Agency, the so-called bad bank created by the government to work out property loans that aren’t being paid back. When NAMA put up land for sale last year, he says, it received bids that were in some cases 60 percent higher than expected. “Land values are stratospheric,” he says. “But good luck to the people who bought it, because they will have to work hard with that land to generate a return.”

McDonagh—former director of finance, technology, and risk at the National Treasury Management Agency, the government’s debt office—should know. In May 2009 he was on loan to the Department of Finance, working on bank bailouts, when he took a call from then-Minister for Finance Brian Lenihan, who asked him to head up NAMA. “I asked him if I had a choice,” McDonagh says. “And he said no.”

NAMA took on 11,500 property-related loans from five crippled Irish banks, including Anglo, in an effort to clean up their balance sheets and get them lending to the “real” economy again. Was a soft-spoken civil servant like McDonagh the natural person to do this? “Personally, I would have probably had thought not,” he says. But he had plenty going for him: “I had no link to the construction industry. So, you know, you get on with the job. Somebody’s got to do it, and the country was in a hard place.”

McDonagh also understands credit, and he’s scathing about the corporate governance and lending standards that passed for rigor at Irish lenders before the crash. “Everyone was championing the banks and so proud of them,” he says. “It was all a fiction. Nobody was looking after the housekeeping, including the regulators at the time.”

By 2005, Irish bank assets exceeded GDP. Two years later, Anglo’s assets hit €97 billion, having increased 22-fold since 1998. The disproportionate size of the banking industry in a country with a population of 4.5 million at the time meant that during the financial crisis Ireland was disproportionately clobbered compared with other countries. “But then Ireland was the bravest in terms of being one of the first countries to sit down and tackle the problem,” says McDonagh. “If you look at other countries that had banking problems, some of them still haven’t resolved them.”

At the height of the crisis, McDonagh says, “the country was febrile.” He basically stopped socializing for a year and a half, weary of being lambasted about the state of the economy by people when he went to the pub. “I often had to remind myself that you can’t take it personally,” he says. “But of course you do.”

Pat Gunne and I are catching up in an office building a short walk from London’s Berkeley Square. All around us are private equity firms and hedge funds that made billions of euros buying distressed properties in Ireland. Gunne—in town for business, as he often is—is chief executive officer of Green REIT Ltd., a Dublin-based real estate investment trust with properties worth €1.5 billion in its portfolio, including Barclays Plc’s EU headquarters in Dublin.

Gunne emerged as one of the property downturn’s winners, but he had his struggles along the way. Always a private person, he visibly winces when asked to discuss his personal experiences of the crash. The loan-to-value ratio of the mortgage on a home he bought in 2006 rose from 50 percent to 200 percent as prices collapsed. Then, when the bubble burst, so did his idea to set up a real estate-focused investment fund. “The level of value decline took us all by surprise,” he says.

And yet Gunne spotted an opportunity. He started by setting up a venture with Stephen Vernon, one of the few developers who sold off assets before the crash, to manage troubled loans and assets on behalf of the banks. The company, Green Property Ventures, ended up overseeing about €7.5 billion of assets in partnerships with Irish and U.K. banks and U.S. private equity groups. Green REIT was born after the government introduced legislation allowing the creation of real estate investment trusts.

The property crash. The financial crisis. And now Brexit, which is certain to have an adverse effect on Ireland as the U.K., its largest trading partner, works out what its commercial arrangements are going to be with the rest of the world. As part of a small island on the edge of Europe, the republic doesn’t have much choice when it comes to charting a future economic course. “Ireland,” says Gunne, “has to be open because it’s incredibly over-reliant on foreign direct investment and inward talent migration.”

Looking back at the bubble across a decade of uneasy times, Gunne found it surprising how “very poor” risk controls were at some property companies that held assets valued in the billions of euros before the crash. “Hindsight’s a wonderful thing, and I’ve made my own screw-ups,” he says, “but you learn from your mistakes. There is still opportunity, but, when you step back from it, rents are high, yields are low.” Which means one thing: “It’s a time to be very focused on risk management.”

Callanan is bureau chief at Bloomberg in London.

To contact the author of this story: Neil Callanan in London at ncallanan@bloomberg.net

To contact the editor responsible for this story: Stryker McGuire at smcguire12@bloomberg.net