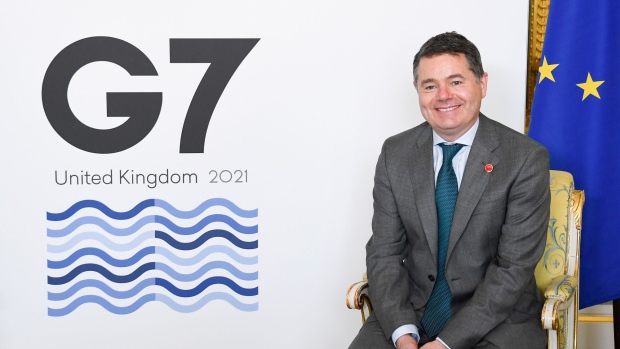 (Bloomberg) -- The U.K. and EU can still reach an accord on the Brexit deal’s Northern Ireland protocol, Ireland’s finance minister said.

“Despite the challenges that we have there at the moment, I do believe we will get an agreement,” Paschal Donohoe told RTE Radio on Friday.

“There are flexibilities and abilities within” the protocol “with regard to agricultural checks that will massively reduce the number of tests and administration that needs to be done. I hope that can form the basis for an agreement,” he added.

The protocol -- which U.K. Prime Minister Boris Johnson agreed to less than two years ago -- created a trade border in the Irish sea, roiling supermarket supply chains and stirring violent protests among Northern Ireland’s unionists. Tensions between the U.K. and EU have been rising for months, with the British criticizing the bloc’s “legal purism” and calling for more flexibility.

The protocol is “a way of managing the disruption that Brexit has caused,” Donohoe said. Ireland and the EU have repeatedly said the protocol cannot be removed.