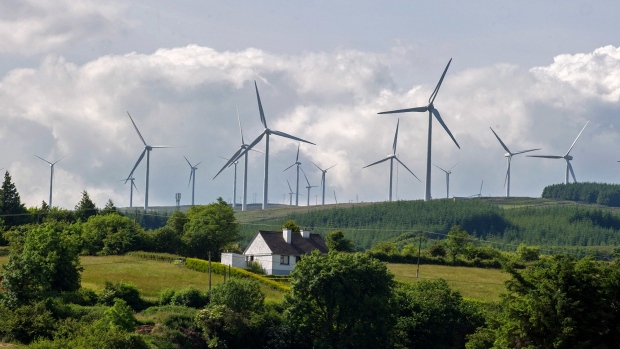 (Bloomberg) -- Ireland’s next wave of green energy capacity will produce power costing almost a third more than previous projects, but will reduce the nation’s reliance on more expensive fossil fuels.

The new solar and wind sites will increase capacity by about 20% as the government targets getting most of its power from renewable sources by 2030. That expansion is key to the European Union’s strategy to slash emissions and cut the bloc’s dependence on imported fossil fuels from Russia.

Higher prices for key materials -- such as steel, copper and polysilicon used in wind turbines and solar panels -- mean the cost of renewable power has jumped 32% to 97.87 euros ($104.28) per megawatt hour since Ireland last auctioned projects in 2020. Still, that pales by comparison with soaring natural gas and coal that’s driven up power prices for consumers. Spot power in Ireland surged to a record 448.96 euros per megawatt hour in March.

“Renewable energy delivered under the scheme will shield consumers from high prices, reduce our dependency on imported fossil fuels in the context of the phasing out of Russian energy imports across the EU and contribute to communities across the country,” said Eamon Ryan, Ireland’s minister for the environment, climate and communications.

Among the auction winners was Statkraft AS, which plans to invest 260 million euros ($277 million) to develop a wind farm and three solar projects. They will have a combined capacity of 360 megawatts, according to an emailed statement.