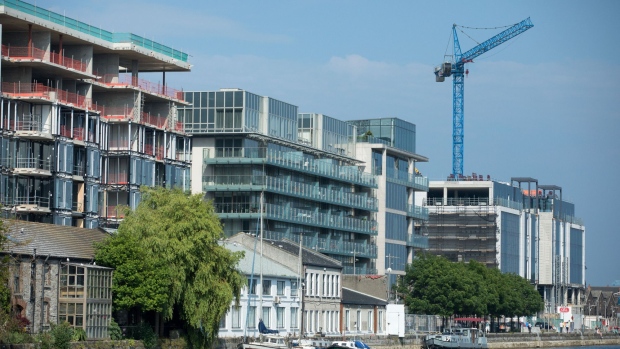 Blocks of residential apartments stand in the Grand Canal area of Dublin, Ireland, on Monday, June 4, 2018. Companies are expanding in Dublin rather than the U.K. in a "silent Brexit," according to Hibernia REIT Plc boss Kevin Nowlan. Photographer: Jason Alden/Bloomberg , Bloomberg

Average rents rose more than 82% between 2010 and the second quarter of 2022, compared to an EU average increase of just 18%, Ireland’s Banking & Payments Federation said in a report Tuesday. The increases could push more people into buying, with house prices in the country rising a less dramatic 55% over the same period.

New home construction has declined on an annual basis, and supply is lagging population growth. Ireland added more than 500,000 people from 2011 to 2022, but housing output grew by only 130,000 units, the report said.

Read more: Rents in Ireland Surge as Much as 24% in Fastest Ever Climb

While property-price inflation decelerated in the third quarter amid economic pressures, that’s likely to be offset longer-term by high rents as well as pent-up demand, according to BPFI CEO Brian Hayes.

The European Central Bank raised borrowing costs by 75 basis points at their last two meetings, which has increased interest rates on some Irish mortgages. A smaller rate hike of 50 basis points is the most likely step at the ECB’s meeting this month, Governing Council Member Gabriel Makhlouf — who is the Governor of Ireland’s central bank — said in an interview on Monday.

Buying still remains a viable option for many consumers despite increasing interest rates, and that dynamic “will likely continue to impact house prices unless we see a substantial increase in supply,” Hayes said.