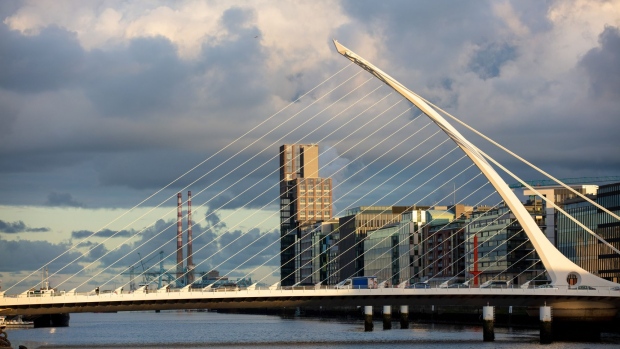 The Samuel Beckett Bridge spans the River Liffey in Dublin, Ireland, on Thursday, Oct. 15, 2020. Office vacancy rate rose from 6.65% at end of the second quarter to 8.64% at end of the third quarter, CBRE Group Inc. said. Photographer: Patrick Bolger/Bloomberg , Bloomberg

Ireland’s central bank plans to tighten regulation for commercial real estate funds amid fears that shocks in the property market could be amplified in the wider economy during a downturn.

The regulator is “consulting on a set of measures to limit leverage and liquidity mismatches” for property funds “that have become increasingly linked to the domestic economy in recent years,” central bank governor Gabriel Makhlouf told reporters on Thursday.

“Leverage is higher among Irish resident property funds than European peers, creating additional vulnerability to price falls, which could lead to selling pressures in the market,” he said.

The proposals would involve introducing leverage limits and guidance around notification periods for property funds “investing over 50% directly or indirectly in Irish property,” the central bank said in a report published Thursday. Under the proposal the central bank could temporarily remove the limit if there was a downturn in the market and could tighten it in the event of “growing exuberance” in the sector.

The central bank has signaled since at least February it was concerned about some real estate funds’ leverage levels and has reiterated those concerns several times since. It will accept submissions on the planned regulations until February 2022.