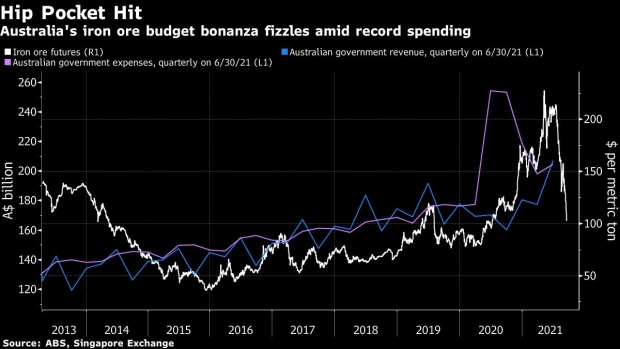 (Bloomberg) -- Australia’s fiscal coffers are under assault on two fronts as its largest export goes into free-fall while the nation’s biggest cities and swathes of the east coast are under virus lockdown, driving up emergency spending.

The price of iron ore has dropped by more than half from a record in May and is now on the cusp of falling below $100 a ton. That comes as the government is estimated to be shelling out up to A$2 billion ($1.5 billion) a week in support payments to firms and workers restricted by stay-at-home orders as an outbreak of the delta variant of coronavirus overwhelms local authorities.

The combined cost could be in the order of A$30 billion-A$50 billion, said Shane Oliver, chief economist at AMP Capital Investors Ltd. in Sydney. The May budget assumed iron ore would follow a straight line down to $55 a ton in 18 months’ time and with the metal now $105 it has fallen below that trajectory, he said.

It’s a dramatic turnaround. Australia was humming just three months ago with Covid contained and iron ore pulling in over $200 a ton, putting the fiscal position on track for rapid repair and to improve on this year’s forecast A$106.6 billion deficit. Today, that’s totally reversed and the position is deteriorating.

“We could end up with a budget deficit that shows no improvement,” Oliver said. Australia’s estimated budget gap was A$161 billion last fiscal year.

Iron ore has been pummeled as steel output curbs and a crackdown on the property sector in China combined to hit demand. The commodity’s rapid descent sent 30-day volatility surging to the highest since 2016 this month.

Since the end of fiscal 2021 the iron ore price has dropped 50% and it takes three to four months for spot to fully roll into trade data. “But that’s a BIG hit to nominal GDP/income coming soon,” he said.

One offset in the short-term could be a lift in the price of coal, the nation’s second-largest commodity export, though this trails iron ore’s scale by a fair way.

Oliver pointed to two potential risks that could exacerbate the position: