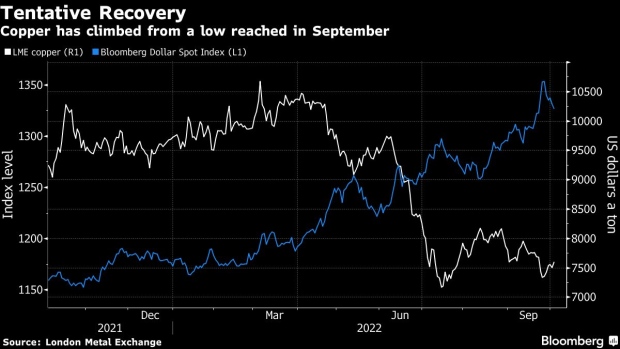 (Bloomberg) -- Copper extended gains after new data pointed to a cooling US jobs market, easing concerns that the Federal Reserve will tighten monetary policy too rapidly.

US job openings plummeted in August by the most since early in the pandemic. That’s likely a welcome sign for Fed officials as they seek to cool demand for workers without triggering a spike in unemployment. The dollar held losses after the print, boosting metals including copper as they’re priced in the greenback.

“There is not much behind the advance outside of a weaker dollar,” said Ed Meir, an analyst at ED&F Man Capital Markets.

Higher interest rates by central banks globally have weighed on metals all year, hurting the demand outlook while also diminishing their appeal to investors. More jobs data due later this week should provide more clues on the Fed’s rate-hike trajectory, with more robust employment gains likely to firm its hawkish stance.

In China, the world’s largest metals consumer, there’s speculation Beijing may soon start relaxing its strict approach to containing the virus. While it’s unlikely that a complete reversal of the Covid Zero policy will take place at the National Congress on Oct. 16, a gradual easing is on the cards, Vivek Dhar, a commodities analyst at Commonwealth Bank of Australia, said in a note.

Aluminum extended its rally from the prior session as traders continued to buy back their previously short positions amidst the weakness in the US dollar, according to Keith Wildie, head of trading at Romco Metals.