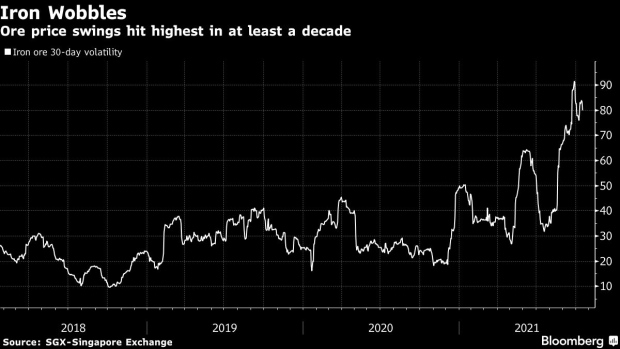 (Bloomberg) -- After a bumper third quarter, the world’s No. 2 iron ore miner is cutting back on lower quality supply after prices of the steelmaking ingredient plunged.

Vale SA produced more than analysts expected and surpassed both the previous quarter and the year-ago period as part of an ongoing recovery from a 2019 tailings dam disaster and thanks to better weather.

But with iron ore futures down more than 40% from a mid-July peak and highly volatile amid Chinese curbs on steel output and concerns over that nation’s property market, Vale is looking to defend margins.

“Production and sales strategy is based on market conditions, prioritizing value over volume, with focus on margin maximization,” the Rio de Janeiro-based company said in its production report Tuesday.

The Brazilian mining giant churned out 89.4 million metric tons in the third quarter compared with the 87.3 million-ton average analyst estimate, showing the recovery is on track despite sluggish permitting in its prized deposits in northern Brazil. That may help counter a drop in shipment guidance last week by top producer Rio Tinto Group and a dip in output at BHP Group.

But Vale’s sales came in only slightly ahead of the previous periods and lagged production. The company is trimming supply of lower-margin ores to the tune of 4 million tons in the fourth quarter, and possibly another 12-15 million tons next year. While 2021 output guidance was maintained, it’s likely to come in below mid range.

Bloomberg Intelligence’s baseline scenario shows a structurally oversupplied iron ore market by late 2022, with surpluses through 2024. The return of tonnage from Vale, which ships high-quality ore, is expected to account for the majority of supply growth.

Vale is also one of the world’s top nickel producers and a major copper supplier. Production of both metals fell after a strike at its Sudbury complex, with annual guidance cut. The company expects to have Sudbury operations back to normal this month and resume its Totten complex early next year after mine shaft repairs

The company, which is scheduled to release earnings Oct. 28., has seen its shares retreat 16% this year in New York. The stock was little changed in after-hours trading Tuesday.