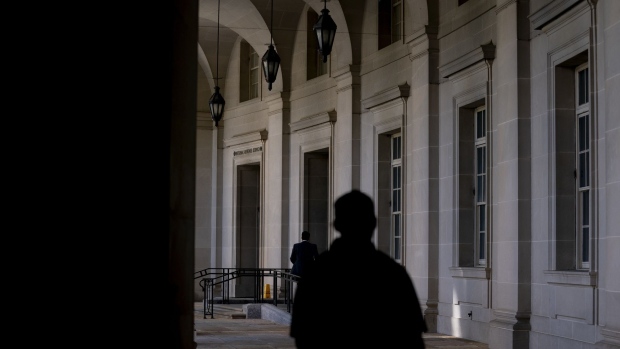 People walk past the Internal Revenue Service (IRS) headquarters in Washington, D.C., U.S., on Tuesday, April 27, 2021. President Biden and House Democrats are clashing over how much to prioritize an extension of an expanded tax credit for parents. , Bloomberg

(Bloomberg) -- It just got harder to hide from the IRS.

Starting this month, users selling goods and services through such popular sites as Venmo, Etsy and Airbnb will begin receiving tax forms if they take a payment of more than $600. One by one in recent months, tech giants have been warning users of the coming changes and asking them to provide tax information.

“Until this year, the threshold was much higher ($20,000 and 200 transactions) so it didn’t affect nearly as many people,” Venmo told users in its messages about the change. “This requirement only pertains to payments received for sales of goods and services and does not apply to friends and family payments.”

The moves have sparked outcry on social media. For one thing, the lower threshold comes as more and more Americans bet on themselves: a record 5.4 million adults applied to form their own business last year, according to U.S. Census Bureau data released this week. That’s partly because it’s easier than ever to use apps to sell crafts, provide services or rent out a second or third home online.

For some, the changes are at odds with President Joe Biden’s vow to tax wealthier Americans.

Apps, marketplaces and payment providers have long had to report certain payments to the Internal Revenue Service for any user that collected more than 200 transactions that totaled more than $20,000 in value in a given year. The new $600 threshold arrived last year as part of the American Rescue Plan, which the White House billed as a way to provide relief to small businesses hit hard by the pandemic.

Take hairstylists. During the pandemic, many beauticians struck out on their own rather than working on a commission basis for more-established salons. PayPal Holdings Inc.’s Venmo and Block Inc.’s Cash App became hugely important to stylists, said Mary Rector, chief executive officer of the hairstyling community Behind the Chair.

“This adds insult to injury, knowing how long they were shut down for and how much income they lost,” said Rector, whose group says it includes 10 million hairdressers around the world. “These people went out on their own, they started to do house calls, they started to rent chairs -- that’s why Venmo became such a big deal.”

The moves come as the IRS has been thrown into chaos during the pandemic. A report this week from the Taxpayer Advocate Service found depleted staffing and a lack of funding for the agency has caused a high volume of unprocessed returns. Taxpayers are frustrated with the backlog and lack of communication from the IRS.

“The IRS is in crisis,” Erin M. Collins, the national taxpayer advocate, said in the report. “As the IRS is preparing to begin the 2022 filing season, it is poised to carry over millions of unprocessed returns and millions of pieces of taxpayer correspondence, resulting in even longer delays for taxpayers who have been patiently waiting for far too long.”