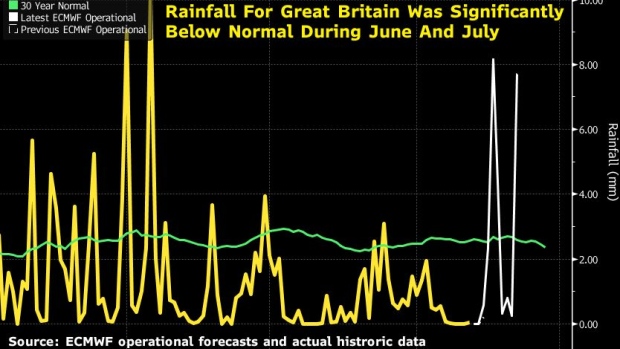 (Bloomberg) -- Extreme heat and dry weather are putting intense pressure on England’s water supply. The National Drought Group -- consisting of government ministers, water companies, farming representatives and other related organizations -- announced on Friday that eight of its 14 areas were officially in a drought.

“The current high temperatures we are experiencing have exacerbated pressures on wildlife and our water environment,” said Harvey Bradshaw, the group’s chair.

“We urge everyone to manage the amount of water they are using in this exceptionally dry period.”

What is a drought?

By definition, a drought is caused by a period of low rainfall. However, the impact it has on people, the environment, agriculture and businesses can vary considerably. Some droughts are short and intense — for example, it could just be one hot, dry summer. Others are long and take time to develop over multiple seasons. England recorded its driest July since 1935, according to the Met Office, and is facing up to a new reality of summer heat waves.

Why are parts of England in a drought?

Weeks have passed since there has been significant rainfall in much of England, particularly in the south where restrictions on water usage were first announced. Temperatures in Britain surpassed 40 degrees Celsius (104 degrees Fahrenheit) for the first time ever in July, a stark warning of the unfolding climate crisis.

The dry summer follows winter and spring months with below-normal rainfall, according to Cathryn Ross, strategy and regulatory affairs director at Thames Water Ltd. “We get a lot of our water from groundwater,” she said in an interview with Bloomberg Radio on Thursday. “The rivers and groundwater haven’t been filled up and replenished with the rainfall we normally expect.”

What does it take for a drought to be declared?

The Environment Agency has four stages as it seeks to categorize the severity of dry weather. After “prolonged dry weather” and “drought,” there is “severe drought” and then “recovering from drought.”

There are no thresholds at which a region automatically falls into an official drought. It is a matter of judgment based on the impact that dry weather is having on water resources and the environment.

Drought status will not necessarily trigger new policies. However, water companies already have pre-agreed drought plans, which follow local factors including reservoir levels, demand and forecasts. This normally leads to certain restrictions such as hosepipe bans.

When a region’s official drought status moves up the scale, it increases the chance of water companies and regulators taking action to reduce water use.

What water restrictions are already in place?

Yorkshire Water Services Ltd. became the latest utility to announce a hosepipe ban, starting on Aug. 26. Three other water companies have already announced or implemented bans, which prevent people from watering their gardens.

Thames Water revealed that it will impose a hosepipe ban on Londoners in the coming weeks. A ban is due to come into effect in Kent and Sussex today, an area served by South East Water Ltd., while Hampshire and the Isle of Wight are already subject to restrictions by Southern Water Ltd.

In London, a water usage ban could even extend to businesses if rain levels remain low in the months ahead. South West Water Ltd. said it is considering water restrictions if the hot and dry conditions persist. The holiday hot-spots of Devon and Cornwall are now officially in a drought, increasing the chance of a hosepipe ban.

What are politicians saying?

Attention in Westminster has turned to the quantity of water that leaks from the system -- and the record of privatized water companies that run each region. Liz Truss, the front-runner in the race to become the next Conservative leader and prime minister, said she would “make sure water companies are held to account”. Speaking at a hustings on Thursday night, she added: “Water is a natural monopoly and we have to be tough on the water companies to do the right thing.”

“This drought is very serious,” said Rishi Sunak, her rival in the leadership race, on Friday. “What’s not acceptable is if we have an enormous amount of water wasted through leakage and indeed polluting our rivers. That’s just not right.”

Is the drought restricted to England only?

No, it is a European-wide problem due to the extreme hot weather conditions searing the continent. Data from late July shows that 47% of European Union countries are facing drought warning conditions and 17% are at alert levels, the European Drought Observatory says. Wildfires have hit France during its third heat wave of the summer. German state forecaster DWD also warned that in some areas there is a very high risk of forest fires.

(Confirmation of drought status added alongside other context)