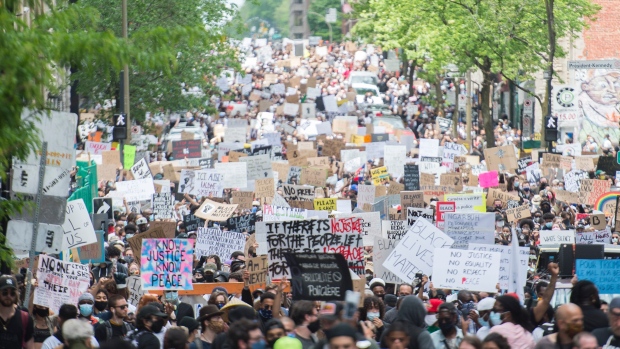 People hold up signs during a demonstration calling for justice for the death of George Floyd and all victims of police brutality, in Montreal, Sunday, June 7, 2020. The Canadian Press/Graham Hughes

As protests against racism and police brutality have gained momentum in the U.S. and around the world in June, fundraising efforts for the families of victims have also proliferated.

One fund set up for the family of George Floyd, the man whose death at the hands of Minneapolis police sparked the demonstrations, has surpassed $13-million.

However, while many online charitable organizations are legitimate, it can be difficult to spot those that are not.

It's for this reason that Toronto-based non-profit and charity lawyer Mark Blumberg established charitydata.ca. The tool boasts 17 years of data on the finances of every registered charity in Canada, designed to increase transparency within the sector and help donors find worthy causes.

Blumberg suggests using the tool to spot red flags in the income and expenditure patterns of registered charities, such as large volumes of gifts in-kind (donations of items, rather than money) which he says can be used to inflate a charity's value and mask the real percentage of funds that end up going toward the cause an organization claims to support. Blumberg also suggests looking for revenue spent on telemarketing and fundraising, high volumes of which should sound alarm bells.

Not all calls for donations happen at the organizational level, though. Crowdfunding platforms like GoFundMe have made it easier than ever for individuals to raise money for a specific person or cause.

It's also easy for bad actors to misuse the platform, setting up accounts impersonating someone or wrongfully claiming affiliation to them.

Among more notable recent cases, the family of Rayshard Brooks -- a 27-year-old Black man shot and killed by Atlanta police earlier this month -- called for the deletion of a number of GoFundMe pages falsely claiming a relation to Brooks.

The site shut the pages down and reimbursed donors, as is standard protocol when staff identify fake accounts, according to GoFundMe regional manager Caitlin Stanley.

She estimated scam pages constitute less than a tenth of a per cent of those set up on the site. But they happen frequently enough that GoFundMe has released an eight-point tip sheet for donors on how to verify that a donation page is legitimate.

"You should be able to answer the following questions by reading the fundraiser: How is the organizer related to the intended recipient of the donations? What is the purpose of the fundraiser and how will the funds be used?" the tipsheet reads.

As a general rule, the more detailed explanation of the funds' purpose, the better. And to double-check the recipient information, try looking up the organizer's name. If they're quoted in news stories about the person they claim to be related to, or if their social media accounts can corroborate their identity, the page is more likely to be legitimate.

When in doubt, Stanley suggests contacting the organizers directly. "Every GoFundMe 1/8has 3/8 a contact button for the campaign organizer," she says. "If you have any questions about the campaign, you can easily reach the organizer and ask them." If, after that, something still feels fishy, walk away.

When looking for a cause to contribute to, Stanley and Blumberg both advise starting close to home. "Support campaigns for the people or organizations that you know, and friends of friends," Stanley says.

Look for organizations within your local community, whose work should be relatively easy to verify by asking around or checking their social media. Blumberg says the most tried-and-true way to ensure that a group is putting its donations to good use is to volunteer with it, but in some cases, its work can be verified through its social media.

If you're willing to put in the effort of verifying a campaign, make it worth your while, Blumberg says. Rather than splitting funds up for a number of causes you care about, select one or two you can get behind wholeheartedly.

"Pick groups that you think are really good, that do great work, and then try to stick with it," he says.