In the future, the Canadian dollar will become less sensitive to oil prices: CIBC chief economist

The Canadian dollar, while historically considered a petrocurrency, has languished in the face of soaring crude prices and is raising questions on whether the link between the loonie and oil still exists.

“The loonie sits close to where it stood in early 2021, when [West Texas Intermediate] prices were running in the low US$50 per barrel range,” Avery Shenfeld, chief economist at CIBC Capital Markets, said in a note to clients Tuesday.

“The most recent spike on the outbreak of war created a flight to safety bid for U.S. dollars at the expense of other currencies, but the loonie hadn’t benefited from oil’s gains prior to the threat of war showing up on markets’ radar screens.”

West Texas Intermediate (WTI) crude has climbed 71 per cent to more than US$120 per barrel since the start of the year, while the loonie appears stuck trading within a three-cent range. 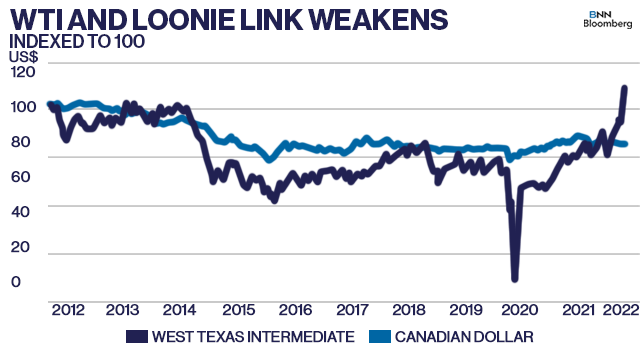 Shenfeld said evidence suggests that the oil-loonie link has been severed which may have important implications for Canada’s energy producers.

“[Energy firms] typically take it into account in thinking about overall hedging strategies for both the commodities price and the exchange rate. It also means that Canada’s inflation rate doesn’t get the usual cushioning effect from a rise in the loonie’s foreign purchasing power when gasoline is most expensive,” he said.

There are two general ways the Canadian dollar has historically benefited from higher oil prices, according to Shenfeld. The first is through a boost to Canada’s trade and current account balance, and the second is through a net positive impact for the Canadian economy as oil companies would increase business investment amid rising commodity prices.

With two separate oil price collapses within the past decade, Canadian energy companies have reined in their spending and account for a smaller portion of domestic GDP. Many have also signalled a reluctance to grow their production even at sky-high commodity prices because of the broader transition away from fossil fuels around the world.

Shenfeld said statistically, the correlation figure between oil prices and the loonie had been 0.88 in the prior decade. A correlation of 1 would mean the Canadian dollar would move in complete lockstep in the same direction of oil prices.

That weakened to 0.75 since 2018, and since last year, the correlation had “essentially disappeared,” though it’s not enough time to declare the link officially dead, Shenfeld said.

“If the CAD-crude link is weaker, for Canada’s oil producers, it implies that the FX moves will no longer be as strong a buffering force for their earnings when U.S. dollar crude prices move in either direction,” he wrote.

“They can enjoy more of a climb in crude without seeing an offsetting appreciation of the Canadian dollar, but conversely, should crude oil retreat from recent heights, it won’t promote as much of a softening in the loonie as we would have seen in the past.”

He expects the loonie to weaken to 76-cents U.S. over the next few months mostly tied to interest rates rather than oil prices, before the currency bounces back to 78-cents U.S. by the end of next year.