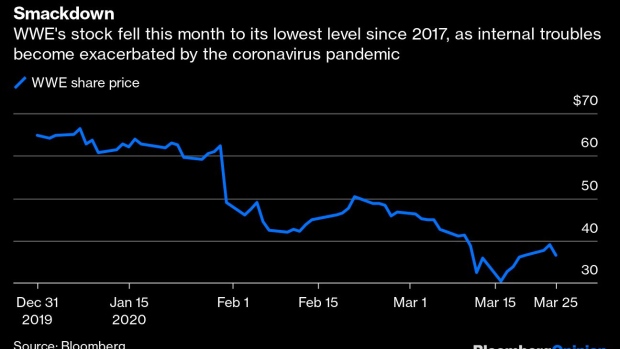 (Bloomberg Opinion) -- Vince McMahon was once tossed into a grave and almost buried alive by the Undertaker. But that’s nowhere near as bad as the year he’s having now.

The burial, of course, was staged, while the agony of 2020 is very real. The coronavirus pandemic has temporarily taken down the business of live sports — both real and fake. That’s left McMahon’s World Wrestling Entertainment Inc. to hold matches in empty arenas, making the spectacle feel even more theatrical than sports-like, with dramatic monologues delivered directly to the camera instead of to the shouting fans that normally line the stands. Meanwhile, McMahon’s XFL football league, which he rebooted earlier this year, had to cancel the rest of its season. XFL is privately held by McMahon; however, shares of WWE have plunged more than 40% since December.

McMahon, the 74-year-old chairman and CEO of WWE, is now looking to free up funds without relinquishing his control over the wrestling empire. On Tuesday, the company disclosed that McMahon entered into a prepaid variable forward contract, which essentially functions as a cash advance from a bank. The way it works is, McMahon agrees to eventually sell some of his shares at some future date — March 2024, in this case — receiving the money now, but without having to actually turn over the stock or pay taxes on the sale yet.

According to Bloomberg News’s Drew Singer, the bank was Morgan Stanley and the deal priced 2.26 million shares at $38 apiece, representing more than $80 million in freed-up liquidity. In the meantime, McMahon gets to collect the usual dividends on those shares, and he can keep the holdings by settling the contract for cash. The agreement also doesn’t affect McMahon’s other 25 million or so class B shares, which represent just over 70% of the company’s total voting power.

Even before the coronavirus began sweeping through the U.S., WWE was having a tough year, amid a shrinking number of subscribers to its streaming-TV service, WWE Network, and setbacks with international distribution deals. After the latest earnings disappointment, McMahon fired co-presidents George Barrios and Michelle Wilson, citing “different views” on how to achieve the company’s strategic goals, in what came as a disconcerting sign to investors.

McMahon, as revered as he is by wrestling fans — his own ring persona, Mr. McMahon, is based on the real him — he has faced some criticism lately for not keeping the franchise fresh enough. He also came under fire last year following John Oliver’s scathing “Last Week Tonight” segment on the health and treatment of WWE’s wrestlers. Notably, while other sports leagues aren’t having their teams play to protect them from the spread of the virus, WWE’s cast is still having to work — and in close contact, too.

WrestleMania, the company’s biggest annual event, is still being held April 4-5 — though without any fans allowed to attend in person, it will lose out on important ticket and merchandise sales. Viewers can watch on the $10-a-month WWE Network app or on pay-per-view. (Walt Disney Co.’s ESPN, struggling to fill its own programming schedule, has been airing WrestleMania classics.)

In bringing back the XFL, which played just one season in 2001, McMahon was hoping to inject some of the WWE flavor into a sport that he sees as dull under the National Football League’s rules and style. When he announced the XFL would return in February 2020, news stories questioned whether it would work this time, giving McMahon something to prove. Now both his babies are hurting, and his wealth is tied up in them.

For years, WWE has been considered an attractive takeover candidate for media giants and live-events companies. It holds a ton of valuable intellectual property in its characters and story lines, which in theory leaves open a realm of possibilities for a buyer with Disney-like ingenuity, building on WWE the way Disney has with the Marvel comic books. Likewise, WWE might appeal to those looking to invest more in sports, as Fox Corp. has stated it’s doing. Media companies are also paying big sums for content with which to stock their new streaming services, such as the Peacock app being introduced next month by Comcast Corp.’s NBCUniversal.

McMahon has long been opposed to selling the company, wanting it to stay in the family. His daughter Stephanie McMahon manages the brand, and her husband Paul “Triple H” Levesque oversees talent and live events — both are wrestlers. The PVF contract helps protect that ownership. It may also help to have Donald Trump connections: McMahon's wife, Linda McMahon, runs the pro-Trump super PAC called America First Action, after stepping down as the president's head of the Small Business Administration last year.

That said, with money tight, the outlook for traditional cable networks souring and McMahon’s XFL passion project meeting an untimely finish once again, now may be the time for any interested buyers to take their shot.