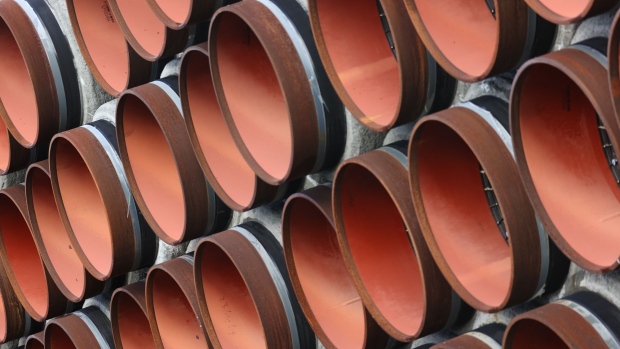 Sections of Nord Stream 2 gas pipeline at the Baltic port of Mukran on the island of Ruegen in Sassnitz, Germany, on Wednesday, Nov. 4, 2020. Chancellor Angela Merkel’s district on the Baltic coast was the site of the last major Soviet military project in communist East Germany and is now at the center of a deepening rift between Cold War allies. Photograph: Alex Kraus/Bloomberg Photographer: Alex Kraus/Bloomberg , Bloomberg

(Bloomberg) -- Egypt and Israel said they may build an undersea natural-gas pipeline connecting the two countries, as they seek to collaborate on exporting the fuel to Europe.

The pipeline would link Israel’s huge Leviathan field to Egypt’s liquefied natural gas plants, the countries’ energy ministries said on Sunday. Egypt said the two sides would work on a governmental framework for the pipeline.

The announcement comes as nations in the eastern Mediterranean ramp up investments in offshore gas fields. Egypt is seeking to become a major hub for exporting LNG to Europe, where demand is growing as governments transition from dirtier fossil fuels such as coal and oil.

The new pipeline would allow Israel to export more gas to Egypt. It can currently send 7 billion cubic meters per year through the EMG pipeline that runs to Egypt’s Sinai Peninsula.

The latest agreement came as Oil Minister Tarek El-Molla made a rare visit to Israel for an Egyptian official. He met his counterpart, Yuval Steinitz, and Prime Minister Benjamin Netanyahu. They discussed working with other countries to convert ships to use natural gas instead of petroleum. El-Molla also traveled to the Palestinian city of Ramallah.

Chevron Corp. and other companies are separately investing hundreds of millions of dollars to help transport Israeli gas to Egypt.

Egypt is increasing exports from its own fields, including Zohr. A tanker arrived at the Damietta LNG terminal to load a cargo of the super-chilled fuel, the state-run Middle East News Agency reported on Sunday.

The loading marks the return to operations of the country’s second LNG plant after an eight-year hiatus. Damietta’s restart was repeatedly delayed amid a dispute over gas supplies.

Egypt has spearheaded the establishment of the East Mediterranean Gas Forum. The group, which also includes Cyprus, Greece, Israel, Italy, Jordan and the Palestinians, is meant to boost cooperation among the region’s gas producers and transit countries. Turkey, which has raised tensions by exploring for gas in contested waters, is not as yet included.