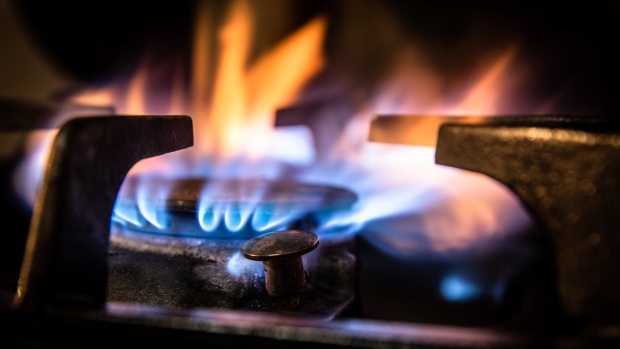 Gas burns on a domestic oven hob in the Molins de Rei district of Barcelona, Spain, on Thursday Sept. 23, 2021. Energy prices are soaring from the U.S. to Europe and Asia as economies emerge from the pandemic and people return to the office. Photographer: Angel Garcia/Bloomberg , Bloomberg

(Bloomberg) -- Israel’s natural gas production surged 22% in the first half of the year, as the government plans to ramp up exports that will make their way to Europe, where the worst energy crisis in decades is under way.

Production rose to 10.85 billion cubic meters year-on-year through June, with exports to Israel’s neighbors rising by 35% to 4.59 billion cubic meters, according to the energy ministry. Much of the increase is due to production from the Tamar and Leviathan reservoirs in the eastern Mediterranean.

Royalties from gas, minerals and fees rose roughly 50% to reach 829 million shekels ($253 million), almost all of which was from gas.

Israel is ramping up output as European nations scour the globe for natural gas, with energy prices on the continent at record levels. The European Union is turning away from key supplier Russia following the country’s invasion of Ukraine, while Moscow has also curbed shipments, leaving buyers rushing to find alternatives ahead of winter.

In June, Israel signed a memorandum of understanding with Egypt and the EU aimed at boosting regional gas production and exports. Gas will be shipped to Egypt, which already receives the bulk of Israel’s gas exports, and then re-exported to the bloc. Initial flows under the deal aren’t expected to be substantial, but could provide Europe with some of the gas it needs as Israeli output rises further in the years ahead.

Still, Israel’s nascent natural gas industry has been a game-changer for the nation, bringing revenues of almost 10 billion shekels into the state’s coffers since 2004. Discoveries off the Mediterranean coast have put the country on the path toward greater energy independence, reshaping regional economic ties and assisting with the transition to renewable energy.

In recent months, those ambitions have faced a setback, with neighboring Lebanon opposing Israel’s decision to move a floating gas rig into the Karish field, near the contested maritime border between the two countries. Ongoing US-led talks have so far failed to find a solution.

Energy Minister Karine Elharrar said the increased production in the first half of the year would help Israel sell its gas to the EU as part of the trilateral agreement, adding that production would likely to continue to expand once the Karish rig begins operations.

Energean Plc, which holds the rights to the Karish field, is on track to begin production there by the end of September, according to a spokesperson, who added that the company has confidence in the security assurances of the Israeli government.