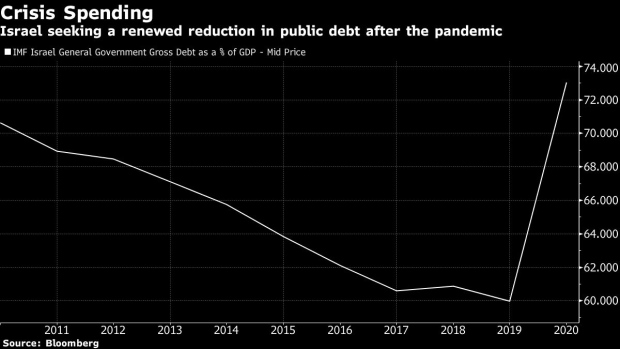 (Bloomberg) -- Israel’s coalition government unanimously approved a national budget for this year and next, a critical step in charting the economy’s rebound from the pandemic. The main stock index rose.

The proposal has to pass three parliamentary readings before a November deadline, otherwise the coalition collapses and the country heads to elections.

Passing the first national spending plan in more than three years is a central priority for the ideologically diverse government headed by Jewish nationalist Prime Minister Naftali Bennett, with members pledging to put aside differences and focus on Israel’s recovery from the coronavirus pandemic.

“After three years of stagnation, Israel is getting back to work,” Bennett said in a statement.

Credit-rating agencies and senior officials including Bank of Israel Governor Amir Yaron have been calling for a new budget to eliminate some of the uncertainty born of the pandemic. Government debt swelled to more than 72% of GDP last year; Yaron has warned that figure could spiral without a proper plan for its reduction.

The new budget includes plans to allow more imports and agricultural reforms to reduce Israel’s cost of living, which is among the highest in the developed world, as well as proposals to cut regulation and increase investments in transportation infrastructure to improve economic productivity.

The government’s agreement on a spending plan will bolster confidence in the stability of a coalition that controls a wafer-thin majority in parliament, and its ability to pass badly needed fiscal reform, said Adi Babani, head of international sales and trading at Meitav Dash.

The approval of the budget helped catalyze a 1.5% gain in the Tel Aviv 35 Index, which was also boosted by a rise in the global stock market.

Israel’s economy is recovering after one of the world’s fastest vaccine drives, with unemployment falling steadily and consumer confidence jumping over the last few months. In July, the central bank forecast growth of 5.5% this year despite a recent surge in new Covid-19 infections.

(Updates with trader comments and market reaction from seventh paragraph.)