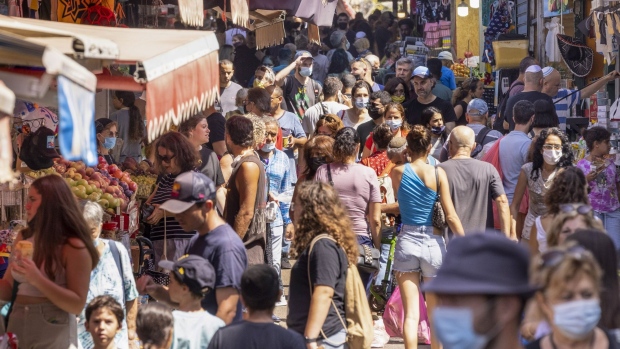 Crowds of shoppers in Carmel Market in Tel Aviv, Israel, on Monday, Sept. 20, 2021. A third dose of the Pfizer Inc.-BioNTech SE Covid vaccine can dramatically reduce rates of Covid-related illness in people 60 and older, according to data from a short-term study in Israel. Photographer: Kobi Wolf/Bloomberg , Bloomberg

The variant was detected after a test was done on a man who returned to Israel from Malawi, the ministry said in a statement on Friday. The authorities suspect two other people who returned from abroad may also be infected with the variant and have placed them in quarantine, it said.

Prime Minister Naftali Bennett on Thursday banned travel to countries where the variant has been discovered and is considering halting flights from those nations. The U.K. has already decided to temporarily ban flights from South Africa and five neighboring countries over worries about the variant.

Scientists are still trying to determine whether the new variant, called B.1.1529, is more transmissible or more lethal than previous ones. What’s clear is that it has the most mutations of any strain yet identified. That’s raised concerns in South Africa and internationally, with authorities fearing a wave of cases that could increase pressure on already strained health-care systems.