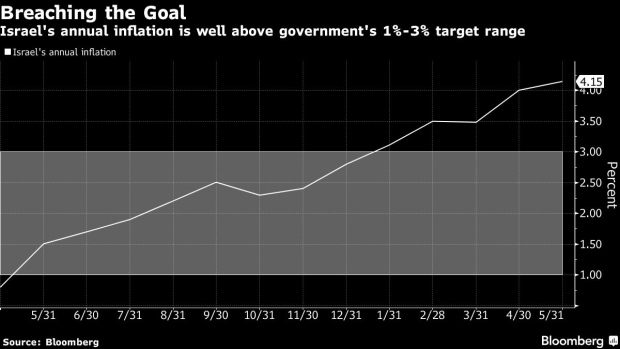 The Central Bank of Israel stands in Jerusalem, Israel, on Thursday, Jan. 9, 2020. The Bank of Israel prolonged its interest-rate pause to over a year after almost doubling the pace of foreign-currency purchases and pinning much of the blame for weak inflation on gains in the shekel. , Bloomberg

The collapse of Israel’s government will add pressure on the central bank’s governor to face down inflation, likely setting the stage for the most aggressive campaign of monetary tightening the country has seen in over a decade.

An interim cabinet that’s now in charge is legally constrained from taking significant measures that could help the country cope with faster price increases, possibly handcuffing fiscal policy into next year if elections result in a longer deadlock.

Although the Bank of Israel has had to work alongside a caretaker government during frequent bouts of electoral instability in recent years, the difference this time is that Governor Amir Yaron is having to contend with inflation stuck above the official target range since January.

The fallout means Israel will have to rely more heavily on interest-rate hikes to control inflation. After delivering bigger-than-expected increases in April and May, the central bank will step up monetary tightening on Monday and raise its benchmark to 1.25% from 0.75%, according to all but two of the 17 economists surveyed by Bloomberg.

“Right now, he’s the only one who can take steps in order to reduce inflation,” said Victor Bahar, chief economist at Bank Hapoalim Ltd.

The Bank of Israel hasn’t had to move so decisively in raising rates since separate bursts of hikes under Stanley Fischer more than a decade ago.

But while half percentage-point increases have little recent precedent in Israel, they aren’t a global rarity at a time when central banks from Australia to Iceland are looking to rein in inflation with the most aggressive monetary tightening in a generation.

As price pressures build, Israel is no longer benefiting from a stronger currency in trying to hold back inflation. The shekel, which is closely correlated with the performance of US equities, is now trading at the weakest since May 2020 after gaining against the dollar in each of the past three years.

“The Bank of Israel’s slower pace of policy tightening relative to its global peers is adding to depreciation pressures on the shekel, a development that will contribute to higher inflation in the future,” Goldman Sachs Group Inc. economists including Kevin Daly said in a report to clients. “In this context, we expect the central bank to be wary of moving too slowly.”

To bring consumer costs under control, Yaron has pivoted from a long stretch of keeping borrowing costs near zero, raising rates by a quarter-percentage point in April and 40 basis points in May. Inflation reached an annual 4.1% in May, accelerating for a second month to remain well above the government’s 1% to 3% target.

Inflation will likely accelerate further in the coming months, as a global rally in commodities and energy feeds into domestic costs. Israel has already announced significant increases to fuel and dairy prices, and talks are ongoing about a possible adjustment for electricity.

While the Bank of Israel’s guidance has been for a “gradual process” of rate increases, the likely shift into a higher gear this week may not be a one-off.

Economists at Barclays Plc and Citigroup Inc. predict policy makers will hike by 50 basis points on Monday, and then again in August, in order to get ahead of inflation.

Another possible change involves the tone of the central bank’s guidance, according to Rafi Gozlan, chief economist at IBI Investment House Ltd.

“Once you increase the pace from 25 to 40 basis points, and you actually surprise the market twice, it doesn’t make sense to say that you are hiking in a gradual manner,” he said.