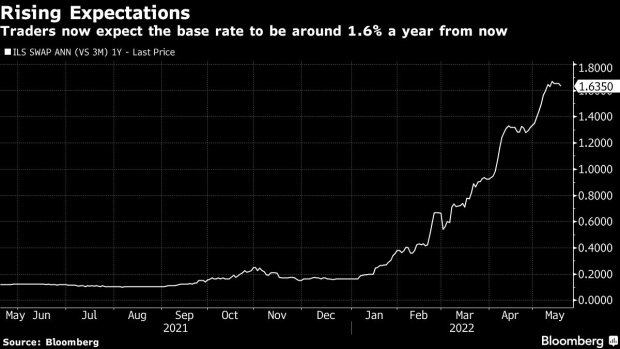 The Bank of Israel is likely to deliver consecutive interest-rate hikes for the first time since 2011, responding to above-target inflation by pursuing a path of monetary tightening that may be faster than it predicted as recently as April.

Economists are unanimous that the benchmark will rise from 0.25% on Monday, but disagree by how much, especially after a bigger-than-forecast increase last month. Most of the 18 analysts surveyed by Bloomberg see another quarter-point hike, while a smaller minority expects a move of 40 basis points.

Without the benefit of a stronger shekel cutting into prices, Israeli inflation has been rising faster than the government’s target pace of 1% to 3% since the beginning of the year. And it’s unlikely to peak for months, especially as global commodities costs come under more pressure from disruptions caused by coronavirus restrictions in China and the Russian invasion of Ukraine.

But a lack of accompanying increases in salaries means policy makers have less reason to act with urgency now, according to Rafi Gozlan, chief economist at IBI Investment House Ltd.

It’s a view already put forward by the Bank of Israel’s monetary committee at the last meeting in April, when it noted that average wages are lagging the strength of demand for labor.

“As long as it stays like this, you’re going to see 25 basis-point hikes,” Gozlan said.

Until now, Israel had slower inflation than peers even as the economy blazed ahead at a record pace from the worst of the pandemic, emerging after a period of near-zero borrowing costs with low unemployment and improved public finances.

An unexpected contraction of gross domestic product in the first three months of this year came in large part due to a technicality, skewed by surprisingly high growth at the end of 2021.

“The state of the economy is good enough and strong enough in Israel in order to enable interest-rate hikes,” said Gil Bufman, chief economist at Bank Leumi.

Israel’s currency, on track for its first decline in years, will lend less support. Last year’s appreciation of the shekel explains a third of Israel’s three percentage-point inflation gap with its peers, according to Goldman Sachs Group Inc.

The U.S. bank said the exchange rate is instead switching to become a “push factor” for price dynamics. Goldman’s economists last week more than doubled their forecast for Israel’s benchmark rate and now see it ending this year at 1.25%.

But unlike in countries like the US, where warnings of a recession-inducing policy mistake by the central bank are growing, Israel’s economic prospects may be upbeat enough to warrant more aggressive rate moves to rein in inflation.

“The Bank of Israel is behind the curve like many other central banks in the world, and it has to go faster to increase interest rates,” said Alex Zabezhinsky, chief economist of Meitav Dash Investments Ltd., who is predicting a rate hike of 40 basis points on Monday.