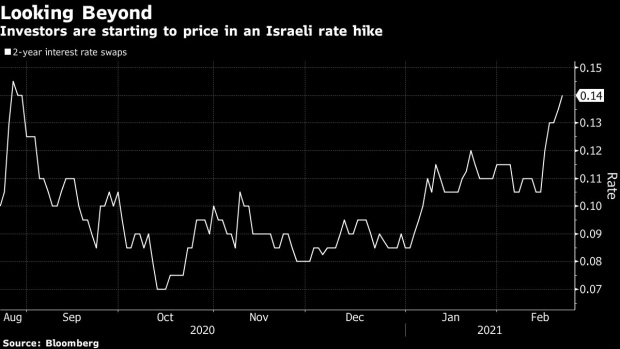 A nurse administers a dose of the Pfizer-BioNTech Covid-19 vaccine to a person inside a cubicle at a Covid-19 mass vaccination center at Rabin Square in Tel Aviv, Israel, on Monday, Jan. 4, 2020. Israel plans to vaccinate 70% to 80% of its population by April or May, Health Minister Yuli Edelstein said on Monday, pressing ahead with a program that promises an earlier-than-forecast economic recovery. Photographer: Kobi Wolf/Bloomberg , Bloomberg

Policy makers left rates at a record low 0.1% on Monday for the seventh consecutive decision, in line with a unanimous forecast in a Bloomberg survey of 15 analysts.

“The fast pace of the inoculation process in Israel increases the optimism regarding a rapid return of the economy to a path of growth in the coming year,” the monetary committee said in the statement accompanying the decision. “The Committee will expand the use of the existing tools, including the interest rate tool, and will operate additional ones, to the extent that it assesses that it is necessary.”

Israel is rapidly inoculating its population against the coronavirus, with close to half of its 9.3 million people receiving a first shot. That’s allowed officials to begin reopening large segments of the economy this week, including shops, cultural venues and gyms.

After the central bank cut interest rates and rolled out emergency relief programs during the pandemic to ease credit and calm markets, policy shifted into a holding pattern as the vaccination push accelerated.

Recent data on 2020 gross domestic product were encouraging, while inflation slowed less than expected. Markets are beginning to price in interest-rate increases in the coming two years.

As the global vaccination campaign picks up pace, officials around the world are beginning to consider increasing borrowing costs. Last week Zambia became the second central bank to hike rates this year, while places from Poland to Brazil are weighing the possibility.

Yet Israel’s policy makers must also contend with an appreciating currency that led them to announce in January that they would buy $30 billion in foreign exchange to slow the trend.

The shekel has slipped some but still trades near a 25-year high against the dollar set last month. Officials noted in the statement that the currency’s depreciation since the mid-January announcement is expected to support exports and a rise in consumer prices.

The Bank of Israel will likely stay away from interest rates hikes until 2023, given the challenge of reducing unemployment that’s grazing 20% and the expected continuation of forces driving the shekel, Goldman Sachs Group Inc. analysts wrote in a note last week.

Expanding the central bank’s intervention in the foreign currency market is still an option, Governor Amir Yaron has said.