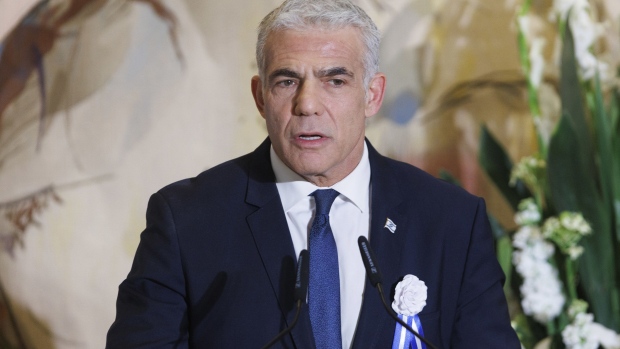 Yair Lapid, Israel's outgoing prime minister, speaks during a swearing in ceremony at the Knesset in Jerusalem, Israel, on Tuesday, Nov. 15, 2022. Having alienated other right-wing figures during his previous stints in power, incoming Prime Minister Benjamin Netanyahu is now dependent on Religious Zionism to hold power. , Bloomberg

(Bloomberg) -- Israeli Prime Minister Yair Lapid has written to 50 heads of states in a bid to prevent a vote in the United Nations that seeks to request an advisory from the International Court of Justice on the Israeli-Palestinian conflict.

“It has long been accepted that the status of disputed territory will be subject to direct negotiations between Israel and the Palestinians,” Lapid wrote in the letter. “A one-sided change to such a policy will have detrimental effects on the entire region.”