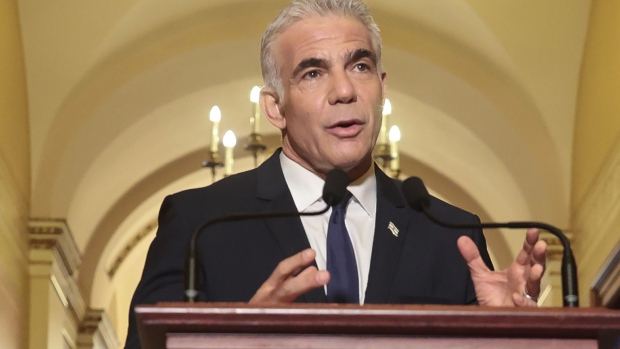 (Bloomberg) -- Israel’s foreign minister said Iran draws closer every day to having a nuclear weapon and warned his country will use force if it must to keep that from happening, a blunt threat that underscored his government’s growing frustrations as world powers seek to revive the 2015 nuclear deal.

Foreign Minister Yair Lapid said during a visit to Washington Wednesday that Israel reserves the right to act “at any given moment in any way” given Iran’s longtime vow to wipe Israel from the map. He said Iranians are “clearly dragging their heels, trying to cheat the world.”

Given Iran’s past threats, action by Israel “is not only our right, it’s our responsibility,” Lapid said at a joint news conference at the State Department with Secretary of State Antony Blinken and United Arab Emirates Foreign Minister Sheikh Abdullah bin Zayed. “Sometimes the world has to show its hand to make sure Iran understands the consequences of running to become a threshold country. We won’t allow it to happen.”

Lapid’s remarks highlighted the ongoing tension between the U.S. and Israel over the Biden administration’s efforts to revive the 2015 Joint Comprehensive Plan of Action, which former President Donald Trump abandoned -- with Israel’s backing -- in 2018.

Israel has long opposed the multinational accord and has spoken out against Biden’s efforts to rejoin the deal. Israel is also widely believed to be behind covert attacks that have damaged Iran’s nuclear research capabilities and killed some of its top scientists.

Understanding the Shadow War Between Israel and Iran: QuickTake

So far, a revival of the deal has remained out of reach. Six rounds of talks between the U.S. and Iran -- conducted through intermediaries and not face-to-face -- have proven inconclusive, with no indication of when a seventh round might start. Officials familiar with the talks say progress has stumbled over Iran’s demand for a guarantee that the U.S. won’t back out of the deal again if, for example, a Republican wins the presidency in 2024.

Blinken said the U.S. still believes diplomacy is the best way to resolve the standoff over Iran’s nuclear program, though he reiterated that the “runway is getting shorter” because the benefits of the nuclear agreement -- such as a minimum one-year breakout time for Iran to develop a nuclear weapon -- will dissipate if Iran’s program keeps advancing.

“We’re united in the proposition that Iran cannot be allowed to have a nuclear weapon,” Blinken said, adding that the U.S. will “look at every option” to confront Iran. “It takes two to engage in diplomacy, and we have not seen from Iran a willingness to do that at this point.”

Iran, which denies its nuclear program is aimed at producing a bomb, has said it would return to the talks “very soon,” as Foreign Minister Hossein Amirabdollahian put it in September.