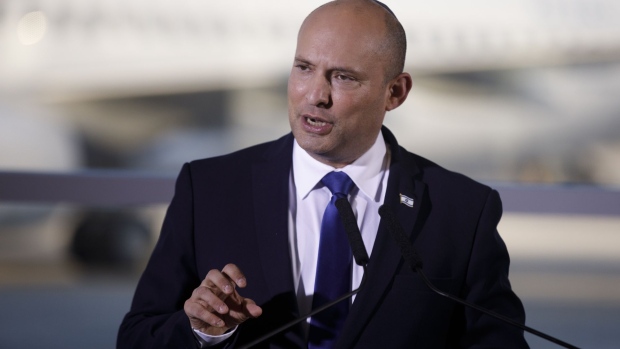 (Bloomberg) -- Israel’s Prime Minister Naftali Bennett doesn’t plan to run in the upcoming general election, according to a statement from his office on Wednesday.

Bennett, who has led Israel’s diverse eight-party coalition since June of last year, will instead focus on his role as alternate prime minister once the parliament votes to dissolve and Foreign Minister Yair Lapid takes over as acting prime minister, the statement said.

Bennett’s government passed the country’s first budget in more than three years and presided over a period of relative calm between Israel and the Hamas-run Gaza Strip. But a series of resignations from within his party in recent months left him without a ruling majority, and ultimately led him to call for fresh elections.

Opinion polls point to opposition leader and former prime minister Benjamin Netanyahu presiding over the biggest party after the next vote, but he may struggle to form a ruling coalition amid fierce opposition to his return to power from politicians across Israel’s political spectrum.

Israel’s parliament is expected to vote to dissolve itself in the coming days and send Israelis back to the polls in late October or early November. It’ll be the fifth election the nation’s held in less than four years.