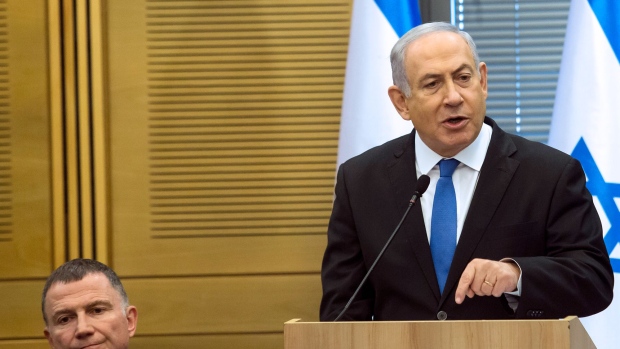 (Bloomberg) -- Israel’s parliament will convene on Thursday for a vote that’s expected to put the legislative agenda in the hands of Prime Minister Benjamin Netanyahu’s opponents.

On Wednesday, Knesset Speaker Yuli Edelstein, a member of Netanyahu’s Likud party, brought the country to the brink of a constitutional crisis by resigning rather than carry out a High Court order to vote on his successor.

The vote is expected to clip Netanyahu’s wings by putting the job in the hands of former military chief Benny Gantz’s Blue and White bloc, which has battled Likud to a draw in three inconclusive elections over the past year. That would allow Blue and White to control which legislation comes up for a vote.

The court circumvented the crisis late Wednesday by transferring Edelstein’s authority to convene parliament to the dean of lawmakers, a legislator from another opposition party.

Edelstein had rejected the court’s order to call such a vote on the ground it infringed on the legislature’s sovereignty. Critics castigated his defiance of the judiciary as an assault on Israel’s democracy. The court said in its ruling Wednesday night that such baldfaced defiance on the part of a government official was unprecedented in the country’s history.

The showdown was closely linked to the political turmoil that has paralyzed Israel for more than a year as Netanyahu, who’s been indicted in three corruption cases, struggles to hold on to power amid his legal woes. On top of the political paralysis that’s been cased by back-to-back elections, Israel is now also facing severe economic fallout from the coronavirus outbreak.