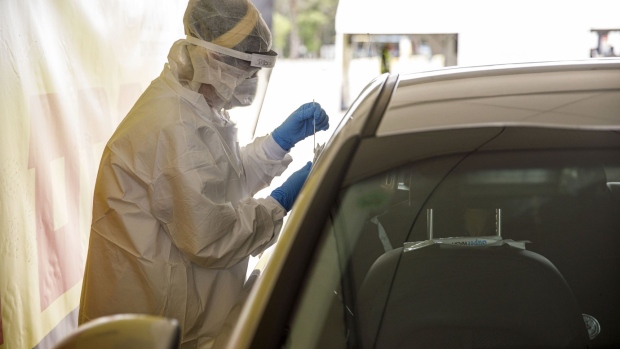 Medical staff perform a demonstration test for coronavirus at the Israeli Emergency Medical organisation Magen David Adom 'check and go' complex for mass coronavirus testing at the Hayarkon Park parking lot in Tel Aviv, Israel, on Friday, March 20, 2020. The coronavirus has raised concerns about the state of Israel’s democracy as well as its public health, even as caretaker leader Benjamin Netanyahu wins plaudits for his assertive handling of the crisis. Photographer: Kobi Wolf/Bloomberg , Bloomberg

(Bloomberg Opinion) -- Day after day, Israel toughens its measures to fight coronavirus. The measures are an escalating version of the same quarantine message. In a televised message on Wednesday night, a frustrated Prime Minister Benjamin Netanyahu put it in blunt terms. “You must stay at home. Stay at home -- stay alive.”

The religious and ethnic communities of Israel, divided in so much, now find themselves on the same side against a common enemy. Not all communities, however, are equally ready to shoulder the burden of compliance.

On the day that new regulations were announced, Israeli television news showed split screen evidence of the disparity. On one side of the screen was an almost deserted Tel Aviv seaside promenade. On the other was a street scene from Mea Sharim, the heart of Jerusalem’s ultra-Orthodox neighborhood. There shoppers crowded stores which were supposed to be closed, and young men in black suits and black fedoras preened for the camera.

In his televised speech, Natanyahu had said that the virus does not distinguish between those who are bareheaded (secular Jews), those who wear a kippa (religious Jews) and those who wear a kufiyah (Arab headdress). It was a rare, and welcome, ecumenical statement by the prime minister. But he didn’t include fedoras -- the symbol of Israel’s million-strong ultra-orthodox communities and that was no accidental omission.

The black hats are Israeli citizens and Netanyahu voters, but their first loyalty is to Jewish law as interpreted by their rabbis. They do not serve in the Israeli army as a matter of principle, do not fly the Israeli flag in their institutions and don’t generally accept Israeli authority. When police have tried to enforce emergency regulations in their neighborhoods, mobs of young men have greeted them with a barrage of rotten vegetables, stones and cries of ‘Nazi!”

This week it was reported that 30% of coronavirus cases were contracted in synagogues and yeshivas. The government has banned indoor synagogue services. Some rabbis have ordered compliance. Many refuse. The “us first” attitude has been encouraged by Minister of Health Yaakov Litzman, himself an ultra-orthodox rabbi, who has fought the synagogue ban and lobbied, so far successfully, to keep ritual baths open.

It is impossible not to contrast such irresponsible isolationism with the behavior of the Israeli Arab community. Like the ultra-orthodox, they are largely estranged from the mainstream, live mostly in their own towns and villages, do not speak Hebrew as a first language and have leaders who do not accept the legitimacy of the Jewish state.

That changed when alarms were sounded by doctors and nurses who are also their neighbors and relations. Seventeen percent of Israelis doctors, a quarter of nurses and almost half of all pharmacists are Arabs. These men and women have been on the frontline of the fight against Covid-19 from the very start, witnesses to the epidemic. Muslim religious authorities, who hold sway in most towns and villages, were convinced by their reports.

The Islamic Movement of Israel, one of the political parties that make up the Joint Arab List, a political alliance of the main Arab parties in Israel, formed an emergency committee. Six fatwas have so far been issued, exempting believers from attending mosque services, even on Fridays. Word spread on the Islamic Movement’s sophisticated cell phone network. Their message was emphatic: Stay at home. For once, Bibi and the Imams found themselves on the same page.

The Israeli public has certainly noted the presence of Arab medical personnel in the emergency rooms and corona isolation wards of the country’s hospitals. Old stereotypes have melted away as Israelis realize that their welfare depends on the expertise and commitment of these doctors and nurses. For the first time they are part of the same army.

There is no doubt that Israeli attitudes toward their Arab fellow citizens will be affected by this. How deeply and for how long depends to a large extent on Arab political leadership. On Saturday, Arab Mother’s Day, a Knesset member from the Joint Arab List sent a special greeting to the mothers of Palestinian prisoners—many of whom are unrepentant terrorists. This had a chilling effect on many Israelis.

On the other hand, Ayman Odeh, head of the Joint Arab List, posted a message declaring the Arabs an “integral part of Israel.” This raised eyebrows. Usually Odeh, like his fellow Arab parliamentarians, declares himself and his voters to be “an integral part of the Palestinian people.”

If the prestige of the Arab community has risen, the image of the ultra-orthodox, already low, has hit rock bottom. Israelis won’t soon forget their indifference and foot-dragging in the midst of a crisis that threatens us all.

Zev Chafets is a journalist and author of 14 books. He was a senior aide to Israeli Prime Minister Menachem Begin and the founding managing editor of the Jerusalem Report Magazine.