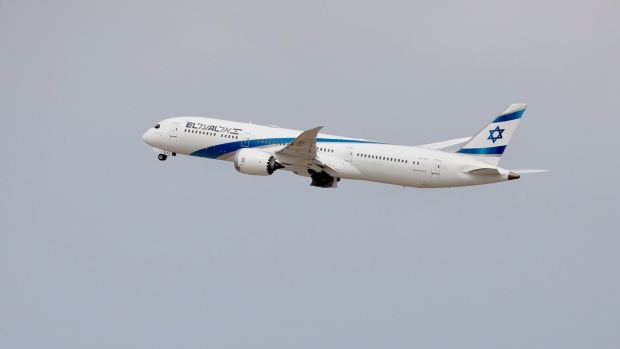 An Israeli airplane crossed through Saudi Arabian airspace for the first time on Monday as it carried a delegation of Israeli and American officials, including senior White House advisers Jared Kushner and Robert O’Brien, to a historic round of peace talks in the United Arab Emirates.

The kingdom allowed the breakthrough El Al Israel Airlines Ltd. flyover after the UAE and Israel agreed this month to establish ties -- a first between the Jewish state and a Gulf Arab nation. Talks during this first, 24-hour round will focus on economic issues, Israeli Prime Minister Benjamin Netanyahu has said.

Ivanka Trump, the U.S. president’s daughter, tweeted a video of Kushner, her husband and a senior adviser to President Donald Trump, and O’Brien, the national security adviser, on the flight.

History Made! #BTS Jared and NSA O’Brien on the 1st commercial flight ever between Israel and the United Arab Emirates! 🇮🇱🇦🇪🇺🇸 pic.twitter.com/kdAHHtsRCs

The opening of Saudi skies, closed because the countries have never had diplomatic relations, reflects the growing willingness by Gulf Arab states to publicly recognize their warming ties with Israel. At the root of this willingness to end decades of hostility is a shared antipathy toward Iran, which Israel and the Gulf Arab states deem a threat to their national security.

Yet the new bonds aren’t without growing pains. A public rift has already emerged over the potential sale of America’s top fighter jets to the UAE, a move that Israel says could compromise its military superiority in the region, which it owes in large part to advanced American weaponry. Both Israel and the UAE deny speculation that such a sale was a tacit part of the diplomatic agreement.

JUST IN: The first Israeli commercial flight to fly over Saudi airspace has just taken off.

Trump and Netanyahu are expected to discuss the possible sale of the planes “at some point,” Kushner, the president’s point man on the Middle East, told reporters on the flight to Abu Dhabi, the capital of the UAE.

Defense officials were left out of the Israeli delegation as the controversy over the potential F-35 sale persisted.

Instead, the delegation will be focused on opportunities for increased bilateral trade. The Israeli Finance Ministry expects commerce to grow from about US$2 billion a year at the start to US$6.5 billion as cooperation matures..