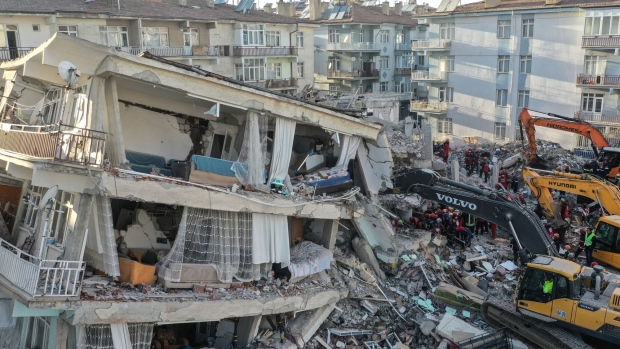 ELAZIG, TURKEY - JANUARY 26: Rescue workers work at the scene of a collapsed building on January 26, 2020 in Elazig, Turkey. The 6.8-magnitude earthquake injured more than 1600 people and left some 30 trapped in the wreckage of toppled buildings. Turkey sits on top of two major fault-lines and earthquakes are frequent in the country. (Photo by Burak Kara/Getty Images) , Getty Images

(Bloomberg) -- Istanbul, Turkey’s biggest city with 15 million people, should prepare for an earthquake of magnitude 7.5.

That was the chilling prediction of Interior Minister Suleyman Soylu after the temblor measuring 6.7 that killed dozens of people Jan. 24 in Elazig province, 750 miles from the nation’s economic heartland. A quake as strong as 7.5 could level buildings and cause tens of thousands of deaths.

The Elazig convulsion, and a much smaller tremor this week, add urgency to warnings by officials and scientists of a calamity. Istanbul sits at the western extremity of the Northern Anatolian Fault Zone, which divides Turkey horizontally and has been hammered by seismic activity since the 1939 Erzincan quake, magnitude 7.2. Five major tremors since then have each been further to the west. The epicenter of the destructive Marmara temblor in 1999 — magnitude 7.6 — was just 70 miles from Istanbul.

“There’s consensus in the scientific community that there will be a large earthquake in Istanbul sooner or later,” Marco Bohnhoff, a geophysicist at the GFZ German Research Centre for Geosciences in Potsdam, said in an interview. The probability of a tremor of up to 7.4 magnitude is 35%-40% within the next 30 years, he said.

History backs up that prediction. The average recurrence of major quakes in or around Istanbul is about 250 years, and the last big one — magnitude 6.4 — was 254 years ago. A tremor in 1509, almost certainly greater than 7, has gone down in Turkish folklore as “little doomsday.”

Since 2002, successive governments of the AK Party, now led by President Recep Tayyip Erdogan, have spent about 4.3 billion liras ($724 million) to replace almost 56,000 risky buildings, according to the Environment & Urbanization Ministry. Istanbul Mayor Ekrem Imamoglu, a member of the opposition party, says that’s not nearly enough.

“We’re talking about the deaths of tens of thousands of people,” Imamoglu said in December. “Our priority is to make Istanbul a city resistant to disasters.”

While it’s impossible to estimate timing or potential impact, a report by the Kandilli Observatory and Earthquake Research Institute reckons that almost one-fifth of Istanbul’s 1.2 million buildings would sustain medium to severe damage in a 7.5-magnitude temblor, resulting in more than 12,000 deaths and losses as high as $20 billion.

That compares with an official death toll of more than 17,000 in the 7.5-magnitude Marmara earthquake of August 1999. The Turkish Business Association estimated losses then at $13 billion.

The economy contracted 3.4% that year. Coming just before another 6% plunge in GDP in the 2001 financial crisis, the disaster was among triggers for the collapse of the political system and the rise of Erdogan’s AKP.

Industrialist Adnan Dalgakiran, recalling razed factories and bankrupt companies after the 1999 disaster, says an Istanbul quake now would have an exponential impact. “The economy would be paralyzed, and it would take years to recover,” he said.

Turkey’s economy is four times bigger than it was in 1999, Bilkent University economist Erinc Yeldan said, so the longer-term impact of a major Istanbul earthquake could be several trillion dollars.

Istanbul accounts for 31% of Turkish GDP, according to data from the statistics agency. The city is responsible for about 36% of national industrial activity and 28% of services.

There have been 13 earthquakes of magnitude 6 or greater so far this year, according to the U.S. Geological Survey. The most recent was Tuesday, when a 7.7-strength temblor off Cuba shook buildings as far away as Miami. There was little damage there or in Cuba or Jamaica.

--With assistance from Firat Kozok.

To contact the author of this story: Taylan Bilgic in Istanbul at tbilgic2@bloomberg.net

To contact the editor responsible for this story: Onur Ant at oant@bloomberg.net, Paul Sillitoe