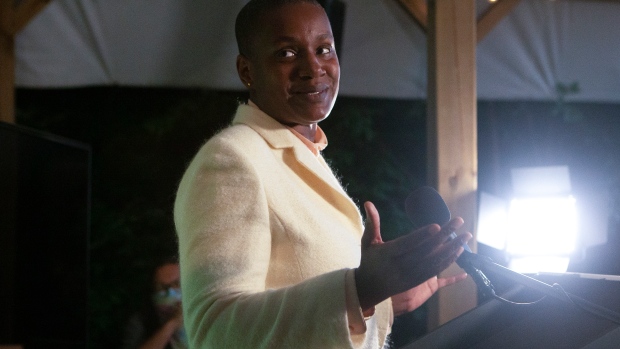 Federal Green Party Leader Annamie Paul stands at the podium as she concedes defeat in her riding of Toronto Centre on election night in Toronto , on Monday September 20 , 2021. , THE CANADIAN PRESS/Chris Young

TORONTO -- Annamie Paul is stepping down as leader of the Green Party of Canada following months of strife within its ranks, saying she doesn't "have the heart" to keep fighting to hold onto the reins.

Paul announced her resignation in Toronto on Monday, a week after the federal election that saw the party fail to grow its foothold in the House of Commons as its share of the popular vote plummeted.

Paul said she started thinking about whether she wanted to stay at the party helm in recent days after learning that a leadership review had been launched.

"I just asked myself whether this is something that I wanted to continue, whether I was willing to continue to put up with the attacks I knew would be coming, whether to continue to have to fight and struggle just to fulfil my democratically elected role as leader of this party," she said.

"And I just don't have the heart for it."

Paul said she knows some will be disappointed and that her supporters would like her to stay on, and stressed the decision wasn't an easy one.

"It has been the worst period in my life in many respects, but I am not alone and you are not alone," she said.

Paul overcame a bid to oust her as leader just weeks before the election, and faced an automatic leadership review following the ballot. She said Monday that she had contacted the party's federal council to start the process of her resignation and the search for a new leader.

The announcement comes less than a year after Paul took the reins of the Greens, becoming the first Black and Jewish woman to lead a major federal party in Canada.

She said Monday that part of her motivation during the campaign came from wanting to pave the way for others like her and show them it could be done.

"What people need to realize is that when I was elected, I was breaking a glass ceiling," she said.

"What I didn't realize at the time is that I was breaking a glass ceiling that was going to fall on my head and leave a lot of shards of glass that I was going to have to crawl over throughout my time as a leader, and when I arrived at (the leaders' debate during the campaign), I had crawled over that glass, I was spitting up blood but I was determined to be there."

Last week's election saw Paul come in fourth in Toronto Centre, her third failed attempt to win the riding. The party elected two candidates, including its first in Ontario -- the same number of seats it held before the election.

The Greens also drew 2.3 per cent of the popular vote, less than half the 6.55 per cent they received in the previous election.

The election was "very difficult," Paul said Monday, pointing to a lack of funding, campaign staff, and a national campaign manager. Ongoing internal strife also undermined the party's chances at the ballots, she said.

"When you head into an election being, again, under the threat of a court process from your party, it's going to be very hard to convince people to vote for your party," she said.

It was a "tremendous struggle" to decide to go through with the election under those circumstances, she said, adding she knew the outcome would likely not be good.

"I knew that we were likely not going to do well, and I knew that as the leader -- even without those tools that I needed -- the first person that the public would look at would be me," she said.

Paul said that while she doesn't regret her decision, it is "quite clear" she wasn't given the opportunity to lead the party and wasn't going to be given that chance in the future.

The head of the Green Party of Ontario thanked Paul for her "bold and daring leadership."

"As leader of the Ontario Greens, I cannot speak for the federal party, but I do recognize that the party I lead has more work to do to combat systemic racism," he said in a statement. "I am committed to doing the hard work to build a party that is diverse, inclusive and welcoming."

Dimitri Lascaris, the runner-up to Paul in last year's party leadership race, said her resignation "is the right decision" for the Greens.

"Now is the time for Canadian Greens to focus on unity and strengthening the Party," he wrote on his website.

Other party leaders thanked Paul for her service.

"Thank you Annamie Paul for your leadership. For your resilience and perseverance. You made it possible for an entire generation of Canadians to see themselves reflected in politics," NDP Leader Jagmeet Singh said on Twitter.

"Thank you Annamie Paul for your perseverance & for being a trailblazer for Canadians from all backgrounds interested in public service. I always appreciated our discussions and admire your tenacity. Wishing you and your family well," he wrote.