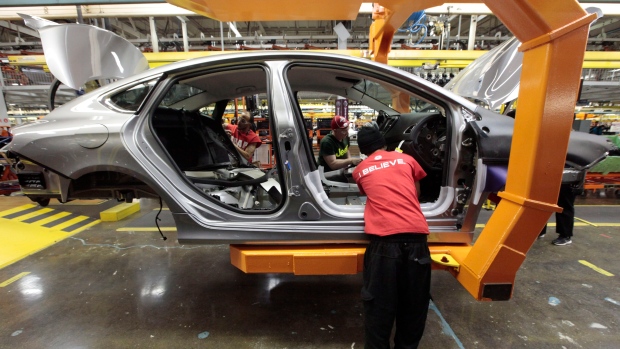 Fiat Chrysler Automobiles (FCAU.N) Chief Executive Sergio Marchionne said on Monday that if tariffs set in a Trump administration on vehicles made in Mexico and imported to the United States are too high, the company may end Mexican production.

“It's possible, if the economic terms imposed by the U.S. administration on anything that comes into the United States that, if they’re sufficiently large that it would make the production of anything in Mexico uneconomical," said Marchionne. "We would have to withdraw. It is quite possible.”

Marchionne, as have most of his counterpart automotive CEOs, said he wants to wait to see what is proposed. He also said that FCA is prepared to respond to whatever policies are set in a Trump administration.

“Let’s find out what happens as a result of President-elect Trump coming in and how he views imports," said Marchionne.

It's finally happening - Fiat Chrysler just announced plans to invest $1BILLION in Michigan and Ohio plants, adding 2000 jobs. This after...

Ford said last week that it will expand in Michigan and U.S. instead of building a BILLION dollar plant in Mexico. Thank you Ford & Fiat C!

Marchionne said that the entire Mexican automotive industry could be imperiled.

"The reality is the Mexican automotive industry has now for a number of years now been tooled-up to try and deal with the U.S. market. If the U.S. market were not to be there, the reasons for its existence are on the line,” Marchionne said.

The United States is the second-largest automobile market, behind China.

Mexico accounts for a fifth of all vehicle production in North America and has attracted more than $24 billion in auto investment since 2010, according to the Ann Arbor-based Center for Automotive Research.

For now, he said, FCA and the wider industry has to delay making any production changes in Mexico.

"It puts everything back on the back burner for the time being, Marchionne said. "I need clarity ... we’re not the only ones who need clarity.”

Earlier on Monday, in a Twitter message, Trump thanked Fiat Chrysler and Ford Motor Co (F.N) for announcements made in the past week of investments in U.S. Midwest plants.

Marchionne said that he has not spoken with Trump or anyone on the presidential transition team. Trump takes office Jan. 20.

The 64-year-old Marchionne said it would be "very, very costly and uncertain” to repurpose Mexican production for export to other markets other than the United States.