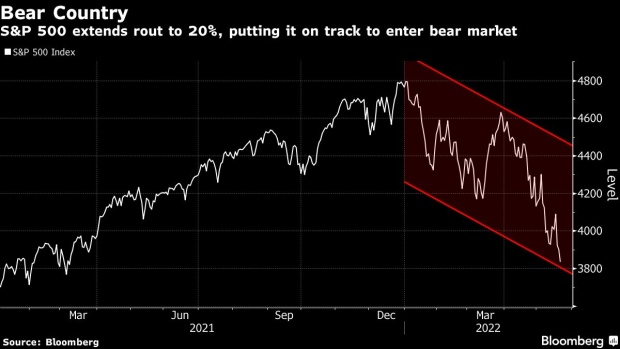 (Bloomberg) -- From Apple Inc. to Tesla Inc., some of the biggest names in the S&P 500 Index are fueling a relentless selloff that has broad equities benchmark on pace to enter a bear market Friday.

The S&P 500 fell as much as 2.3%, bringing its decline to more than 20% from its record closing high set on Jan. 3, the first time that has happened since the coronavirus pandemic hit in early 2020. The monthslong selloff was exacerbated this week as retail companies slashed earnings outlooks, casting doubts on whether consumers can withstand rising inflation amid concerns of slowing economic growth.

Here’s what Wall Street pros are saying about what’s happening and what it all means:

“It’s a complete buyers’ strike right now. It shows a complete lack of faith with buyers. Markets are starting to look very oversold here and we’re about to see if there’s a bear market bounce over the next few weeks.”

“All of this has been driven by two major forces that were reiterated this week: one is inflation and how stubbornly high it is. And the second is how aggressive the Federal Reserve will likely be to get it under control. That manifested itself in a couple of earnings misses from Walmart and Target with input costs not being passed along to consumers and profit margins getting squeezed, and everyone is extrapolating that out to the rest of Corporate America.”

“I think that’s probably the wrong thing to do, but in the here and now, it’s hard to stop this body in motion once it starts in motion.”

“The Fed giveth and the Fed taketh away. Obviously, anyone still hoping for a Fed put is dreaming, and we expect volatility to continue here for a few reasons. We could see rallies as you often do during bear markets, but I wouldn’t read too much into them. The market is waiting for answers that aren’t likely to come for some time, and it’s never good when retail sentiment is low and investors are left alone with only their thoughts to guide them.”

“It was bound to happen because I think the bears wanted to push it there. And a fair amount of people had turned bearish. Positioning is catching up with sentiment right now.”

“With the S&P 500 index in bear market territory, traders will likely continue to fade every rally until the Fed voices concern about market functioning. Inflation is enemy No. 1 for the Fed, but if credit conditions deteriorate and the financial plumbing is becoming an issue, the Fed could change their tightening course.”

“In my view we’re going to be entering a recession in the next year. We find there’s a lot more value outside the US and indeed looking globally to invest. The Fed is going to be blamed for a recession when it comes, perhaps rightly, because they waited too long.”

“We’re seeing cracks in the consumer via the retailers reporting, but the consumer is still fairly strong overall and still has all of that excess savings that we’ve talked about. Wage gains are still strong. And so while inflation is really weighing on sentiment and at some point will probably weigh on spending, the consumer’s still there and earnings growth is still there for now as well. So this has been mostly multiple contraction. It has been ugly, but it’s actually been, under the surface, not as bad as it looks.”