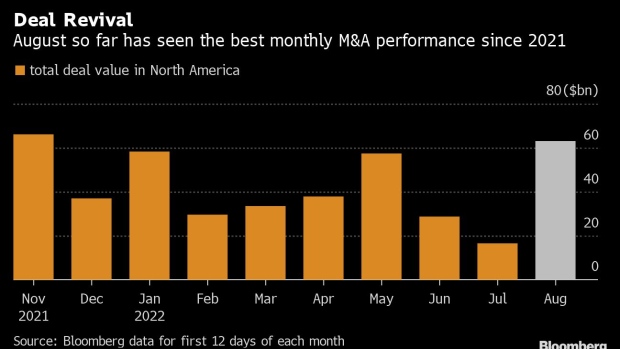 (Bloomberg) -- A surprise surge in deals is turning August into a memorable month for mergers and acquisitions, helped by rising stock prices and steadier US markets.

Already $63 billion of transactions have been announced in North America, the most for a comparable monthly period since November and eclipsing the $52 billion in deals for all of July, according to data compiled by Bloomberg. Among an eye-catching 613 combinations proposed in this traditionally sleepy summer month is Vista Equity Partners’ plan to buy tax-management software provider Avalara Inc for $7.8 billion.

A July M&A survey listed stock market volatility and financing disruptions as two big causes for delaying or abandoning pending transactions. Merger arbitrage specialists say the stock rally that started in July, and a generally stabler tone in all markets, are now moving deals along.

The S&P 500 rallied 9.1% in July and another 1.9% this month, while the Cboe Volatility Index, a gauge of Wall Street worry, slid below the key $20 level earlier this week before reversing slightly.

“Especially for private equity firms, the only purpose of their cash is to make acquisitions and that money does not have an unlimited lifespan,” Roy Behren, co-chief investment officer at Westchester Capital Management, said in an interview. “In the event that we are going into a recession, companies will need to continue to grow their top lines and making acquisitions could help accomplish that goal. Or if we end up in a soft landing, companies want to be prepared for that too.”

To be sure, M&A volume in the US and globally this year is down from 2021’s record highs.

But Goldman Sachs Group Inc. strategist Sienna Mori wrote in a report this week that the market is showing resilience, suggesting companies remain focused on strengthening and diversifying their business mix to withstand economic shocks.

For example, Pfizer Inc. this month unveiled an acquisition of Global Blood Therapeutic Inc., while an investor group led by Apollo Global Management Inc. proposed a buyout of Atlas Air Worldwide Holdings. Each deal is valued $4.6 billion, according to Bloomberg data.