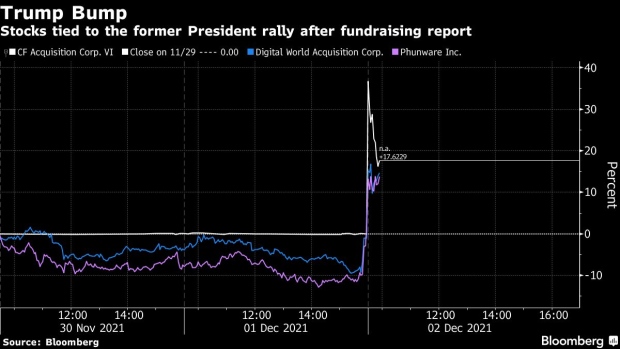 Donald Trump points to members of the media before boarding Marine One on the South Lawn of the White House in Washington, D.C. , Photographer: Stefani Reynolds/Bloomberg

(Bloomberg) -- Donald Trump is helping to spark a rally in some stocks Thursday following a report that the former president’s media group is in talks to raise as much as $1 billion.

Digital World Acquisition Corp., the blank-check company set to bring Trump Media & Technology Group to the market, surged as much 22% after Reuters reported that the nascent social venture is holding discussions on financing. The news is boosting other stocks with ties to Trump.

For example, Phunware Inc., a software company that worked on Trump’s re-election campaign, leaped as much as 24%. And CF Acquisition Corp. VI, a blank-check firm sponsored by Cantor Fitzgerald, rocketed up 47% before paring some of those gains as it agreed to merge with video platform Rumble Inc., which touted Trump as among its top creators and highlighted an “acceleration of big tech censorship” in an investor presentation.

On social media platforms like Twitter and Reddit, investors were quick to compare CF Acquisition to Digital World Acquisition. The outperformance of CF Acquisition could be partly driven by its lower valuation, as investors rush to trade stocks exposed to the former President, according to Tuttle Capital Management Chief Executive Matthew Tuttle.

“I don’t think this has anything to do with Rumble, it’s all Donald Trump, it’s a Trump day with the fundraising news,” he said by telephone. “But at the end of the day, DWAC is the pure play. While CFVI is a platform he’s on but isn’t the pure-play Trump.”