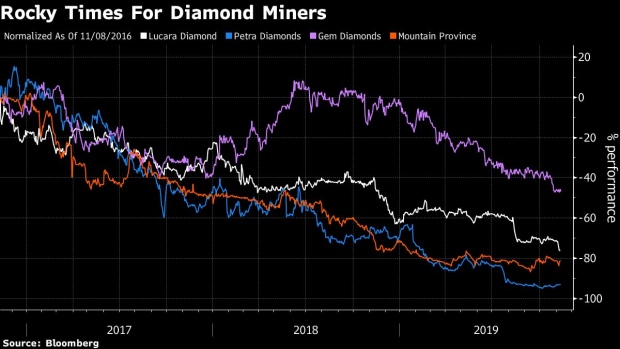 An uncut diamond is selected from a collection of colorless and colored diamonds on a sorting table at DTC Botswana, a unit of De Beers, in Gaborone, Botswana. , Bloomberg

(Bloomberg) -- While the world’s biggest diamond miner surprised the market by cutting prices this week, a slew of filings from its smaller rivals show the move was inevitable.

While De Beers is a price maker in the supply of rough diamonds, dictating what its customers pay, most other miners are price takers. Gem Diamonds Ltd. and Lucara Diamond Corp. -- both known for digging up the most-expensive stones -- and Mountain Province Diamonds Inc. all reported lower prices this week.

Much of the industry’s current problems have focused on tumbling prices for cheaper, smaller goods, the sort of diamonds that end up in a Walmart ring, but the recent results show even the crown jewels are also feeling the pinch.

Diamond buyers, the industry’s invisible link between African mines and jewelry stores in New York, London and Hong Kong, are being squeezed like rarely before. With too much supply and banks tightening their financing, many traders have been unable to make a profit. That’s now blowing back on the miners.

The De Beers price cut was catching up with the “reality of market conditions,” said Edward Sterck, an analyst at BMO Capital Markets in London. “We think we must be approaching the nadir of the diamond market, which may just mean that a recovery is in the cards,” he added.

Gem Diamonds, which mines the world’s most expensive stones, sold its diamonds for $1,417 a carat in the third quarter. While still an eye-watering figure in an industry that averages less than $200 a carat, it’s down from about $2,100 in 2018.

At the bottom end of the market, things have been difficult for a long time. Mountain Province has been struggling with low prices since the beginning. In a 2014 feasibility study, it expected prices of $120 a carat, but sold stones for $53 per carat in the third quarter. The company runs the Gahcho Kue diamond mine in Canada in a joint venture with De Beers.