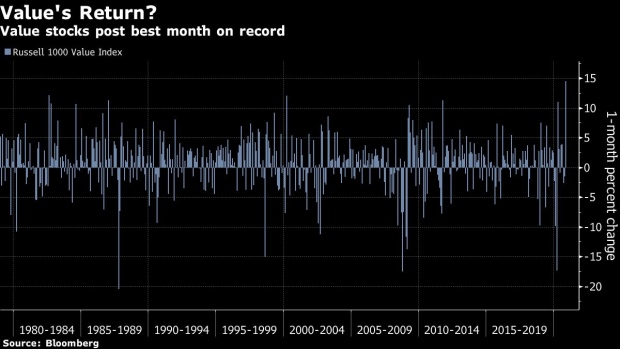 (Bloomberg) -- It was a bumpy end to one of the best months on record for risk assets.

While stocks slumped Monday, the selling did little to damage a November that will go down in the history books. Small caps rose the most on record, Bitcoin reclaimed an all-time high, gold slumped the most in four years and energy stocks headed for their best month ever.

Chalk it up to a near unprecedented confluence of good news. For four straight Mondays, a different drugmaker reported advances on vaccine trials, sparking a furious rotation into stocks that benefit most from economic growth. The U.S. election delivered a clear winner and central banks reiterated plans to keep monetary policy loose.

“What’s really taken most people by surprise is that if anybody said to you in March, ‘Hey we’re going to have a year where really most businesses are working at not-full capacity, most restaurants may not even be open, people aren’t going to the office, and oh yeah, by the way, we’ll hit all-time highs,’ people would have thought you were nuts,” said JJ Kinahan, chief market strategist at TD Ameritrade. “It’s been amazing.”

Equities worldwide are headed toward their largest monthly gain since the late 1980s, as the S&P 500 Index, Nasdaq Composite Index and Dow Jones Industrial Average continue to break all-time highs. Exchange-traded funds tracking stocks in the U.S. added more than $77 billion in November, on pace for a record.

Small caps are finally winning over fans amid expectations of a strong economic rebound. The Russell 2000 Index has gained about 18%, placing it on track for its best month ever. ETFs focused on the category have taken in $8 billion in fresh cash, the most since 2016.

Grabbing headlines away from big tech, cyclical areas continue to surge as the equity rally broadens. Energy shares in the benchmark gauge are headed for the best month on record, while industrial and financial companies have risen the most since 2009. That’s also pushed an equal-weighted version of the S&P 500 toward its best month in more than 10 years.

Vaccine optimism ignited a rotation from high-flying growth stocks into beaten-down value shares. Up almost 14% in November, the Russell 1000 Value Index is on track to post its best month on record. Growth stocks have gained too, up about 9%, but that gap is the widest in favor of value since the early 2000s. At the same time, ETFs tracking value have added the most cash since at least 2013.

“We will begin to see more flows to value stocks if it looks like an economic recovery is really taking hold, and that is very possible,” said Matt Forester, chief investment officer of BNY Mellon’s Lockwood Advisors. “And of course, the stocks have really big discounts to the growth stocks.”

Building optimism in the equity markets hasn’t been matched by bond traders. The looming specter of further Federal Reserve action amid spiking virus cases sparked a quiet rally in long-dated Treasuries even as risk assets surged. Benchmark 10-year yields dropped roughly 2.8 basis points in November, flattening the 2-, 10-year yield curve by the most on a monthly basis since July.

For the world’s largest digital currency, November was a banner month. A red-hot 40% rally vaulted it to a record high, a milestone it last reached in 2017. Crypto fans cited a warmer institutional embrace as the catalyst for the renewed rally, while also seizing on the central-bank-money-printing narrative to promote the notion that Bitcoin is a store of wealth.

A brightening outlook for global economic growth has weighed on haven assets, dragging the Bloomberg Dollar Spot Index to its lowest level since 2018. The gauge has dropped 2.7% so far in November, bringing its slide since March to 12%. That slump has fueled its global peers higher, with the greenback on track to fall against every other Group-of-10 currency this month.

Amid the risk-on mood, demand for gold slipped, pushing its price down below $1,800 an ounce and on pace for its largest monthly decrease since 2016.

“Gold has really broken down,” said Andrew Mies, chief investment officer of 6 Meridian. “Right now you have people who are looking at gold and saying, there are other areas I’d rather be in.”