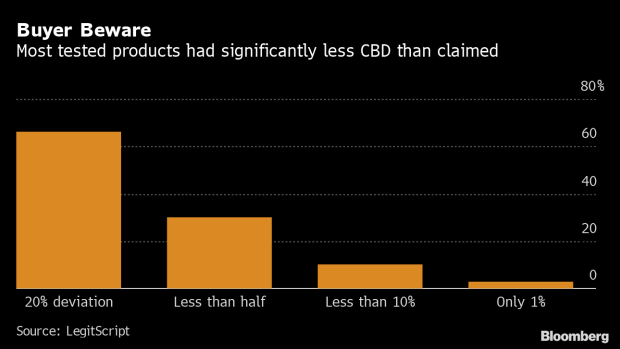 A new study of 300 online cannabidiol merchants by compliance firm LegitScript found that 98% were non-compliant with regulations in at least one category, with several selling products that made fraudulent claims and one that even contained toxic levels of lead.

“We thought we would see some problems but the notion that 49 out of 50 of these online sellers are not compliant is really troubling,” LegitScript founder and Chief Executive Officer John Horton said in a phone interview. “It’s very much caveat emptor right now.”

CBD is a non-intoxicating compound found in the cannabis plant, and certain forms of it were legalized in the U.S. last year with the passage of the farm bill. It’s soared in popularity as proponents say it can help alleviate everything from chronic pain to insomnia, but little scientific research has been done.

There’s no shortage of options for consumers, as there are between 10,000 and 13,000 merchants selling CBD on the internet, according to LegitScript.

But many of those are selling illegal product formats, selling into jurisdictions that don’t allow it, making unproven claims, or some combination of the three. Of the 300 websites studied, 45% included impermissible claims that their products can treat serious diseases like cancer, Alzheimer’s and clinical depression.

LegitScript also tested 30 products from websites that appeared near the top of search results. Two-thirds of those contained significantly more or less CBD than they advertised, with nine containing less than half. One tested product had only 1% of what it claimed.

Most concerning, one bottle of ingestible oil had 18.5 times the allowable amount of lead by California standards.

“It had so much lead in it that it’s roughly on par with Flint, Michigan drinking water,” Horton said. “People have assigned blind faith in CBD and they say, ‘I’m taking this daily and it’s great!’ Well, if you’re taking this product on a daily basis, your health is really at risk.”

The study raises concerns about the legitimacy of online CBD marketplaces as major technology providers Shopify Inc. and Square Inc. begin working with them.

Horton called on the Food and Drug Administration to issue more clarity on CBD rules and online marketplaces to seek out private certification, or else risk losing consumer trust permanently.

“When you get up to a certain percentage of non-compliance in any market, consumers lose trust and the entire market falls apart,” he said. “There’s a real problem here, but it is fixable.”

One Year In, Legal Canadian Pot Fails to Match the Hype

Jamaica’s Government Wants to Talk to Donald Trump About Ganja

Labor Peace for Pot a Must for California Cannabis Businesses

To contact the editors responsible for this story: Brad Olesen at bolesen3@bloomberg.net, Morwenna Coniam, Divya Balji