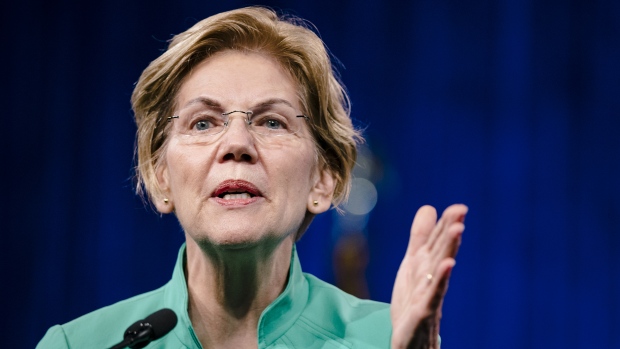 (Bloomberg Opinion) -- At the third Democratic presidential debate, Thursday night in Houston, Senator Elizabeth Warren will be in the catbird seat. Each of the nine other candidates will be hoping that someone else takes the initiative to dislodge her.

Warren has a long way to go to claim the Democratic nomination. Former Vice-President Joe Biden, despite gaffes and age, will remain a formidable obstacle. The overwhelming majority of Democrats would ultimately support Biden with greater or lesser enthusiasm. Senator Bernie Sanders will no doubt continue to dominate the party’s left edge and retain the undying loyalty of his Bernie Bros.

But if you were one of the 10 candidates headed for the stage in Houston, you’d want to be Warren. The Massachusetts Democrat is the only contender whose support grew substantially over the summer. Taking March 31 as an arbitrary starting date and measuring until this week, Biden has declined slightly, Sanders has declined slightly and Warren has roughly tripled her support. Pick just about any other random date and the conclusion is the same: Warren has singular momentum in a field where others seem to be slipping or stalled. She is also deemed a strong contender in Iowa, which holds the nation’s first caucus next Feb. 3.

A primary candidate with momentum is a candidate with a target on her back. “I think the big angle is who will slow Warren down, because somebody has to,” said veteran Republican strategist Mike Murphy in an email.

However, Warren’s most formidable foes have reason to be cautious. If Biden attacks her, he risks helping to elevate her above Sanders as the challenger he fears from the left. Biden prefers Sanders and Warren to split that vote. If Warren draws support from Sanders, she will continue to rise, which only renders Biden’s position more precarious.

Sanders has reason for caution, as well. Sanders is an avowedly ideological candidate. Warren appears to be the candidate who most closely resembles Sanders in an ideological Rorschach Test. If this is really all about achieving Sanders’ goals, instead of realizing his personal ambition, he risks appearing hypocritical if he undermines an ally who is equally, or perhaps better, positioned to reach the pinnacle.

Warren’s current position recalls Barack Obama’s in 2007. He faced a formidable front-runner, Hillary Clinton. Yet scattered support among multiple other candidates suggested there were many votes available to Obama, sooner or later, without having to pry Clinton voters loose.

Likewise, Warren doesn’t need to convince Biden voters to switch their support to her — at least not yet. She needs more support from black voters, which Biden has. But she doesn’t need it right away. Rising with a positive campaign, she has no greater reason to attack Biden on stage than he has to attack her. She wants to be the final destination for votes that are currently parked with other candidates.

One of those candidates is Californian Kamala Harris. A mixed-race senator from the nation’s largest state, Harris has formidable political assets but has so far failed to translate them into wide support. (A Harris campaign document left behind at a New Hampshire restaurant acknowledged a “summer slump.”)

At the first debate, in June, Harris delivered a premeditated roundhouse to Biden, walloping him on an ancient position on school busing. It was impressive stagecraft but it appears to have had no lasting effect. Except to prove that calculated attacks on the debate stage are rarely a sure bet.