Nations are being forced to go it alone in erecting defenses against the relentless strength of the almighty greenback, with no sign that governments are willing to act in concert.

Fueled by hawkish Federal Reserve policy, US economic strength and investors in search of a haven from market swoons, the greenback is surging relentlessly against counterparts big and small by the most in decades. On Friday, it pushed up to its highest level against the euro in 20 years, and was the strongest against the pound since 1985.

Japan has become the latest major country to step directly into the foreign-exchange fray, joining nations from India to Chile that have been tapping their dollar stockpiles in the fight against the mighty greenback.

While the problems in currency markets right now are in many ways reminiscent of the 1980s, the solutions are unlikely to be. Back then, the world’s economic superpowers agreed to tackle in unison the problem of persistent dollar strength, coming to an agreement in 1985 with the Plaza Accord. This time around, there’s little sign such a pact will be forthcoming as national economic interests diverge and the multi-decade shift toward greater global integration is thrown into reverse.

Coordination along the lines of a fresh Plaza Accord would need to include the US administration and there is “close to 0 per cent probability on the Treasury intervening right now to weaken the dollar,” said Viraj Patel, a strategist at Vanda Research. “There’s tons of literature that shows ‘leaning against the wind’ in FX is a futile exercise when monetary policy is having the opposite effect.” 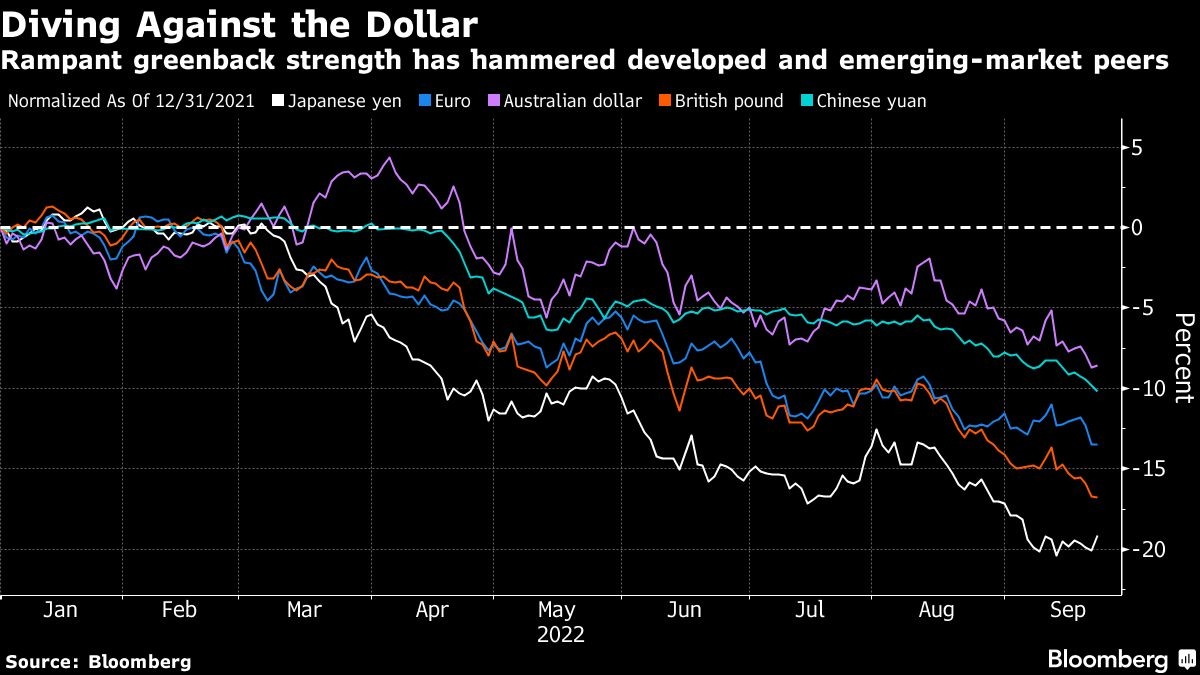 The action undertaken by Japan on Thursday was very much a solo affair, with an official from the US Treasury confirming that it did not participate and the European Central Bank saying it was not involved with currency market interventions. A spokesperson said the US Treasury understood the move but stopped short of endorsing it.

The depreciation of everything from the euro to the South Korean won is adding fuel to already burgeoning inflation pressures across the world, forcing many policy makers to dig deep into their toolkit.

China, the world’s second-biggest economy, is continuing to mount its own defense against the dollar with stronger-than-expected FX fixings. And central banks around much of the world -- with Japan, some exception -- are weighing in to boost interest rates as they contend with rising consumer prices and FX depreciation.

The Bloomberg dollar index, which measures the currency against a basket of both emerging- and developed-market counterparts, hit fresh highs this week after the US central bank confirmed its determination to lift borrowing costs in a bid to slay inflation.

That broad-based dollar strength, combined with the market fallout from the latest Bank of Japan decision, evidently proved too much for the Japanese government. Officials in Tokyo had previously only talked about FX market concerns, but amped up their fight Thursday by acting directly to prop up the yen for the first time in decades. That’s even as its central bank bucked the global trend toward monetary policy tightening and held the line on keeping official borrowing costs low.

Japan joins a growing group of countries that have taken direct action in foreign-exchange markets, including Chile, Ghana, South Korea and India. Switzerland’s central bank said at its policy decision Thursday that it is prepared to intervene in FX if needed.

“It’s an ‘every man for himself’ scenario right now because the world is much more fragmented today than in the 1980s,” said George Boubouras, a three-decade markets veteran and head of research at hedge fund K2 Asset Management. “The chances of global coordination to weaken the dollar are close to zero -- expect to see more reverse currency wars.”

One key difference from the 1980s is the sheer size of FX trading nowadays, with average daily turnover reaching US$6.6 trillion during the most recent triennial survey conducted by the Bank for International Settlements back in 2019. That’s up from US$5.1 trillion just three years earlier and considerably larger than it was back in 1986 when the BIS began this kind of activity survey.

An ever-stronger US dollar leaves policy makers from Tokyo to Santiago in near-constant firefighting mode to mitigate its damage to their economies. It’s also exacerbating an inflationary dilemma whose seeds were sown during the pandemic supply-chain crisis and Russia’s war in Ukraine. The greenback’s surge this year has already driven up the cost of food imports around the globe, triggered a historic debt crisis in Sri Lanka, and compounded losses for bond and stock investors everywhere.

As long as the Fed is raising borrowing costs faster than most peers though, almost every other currency will remain under pressure.

Unlike the 1980s, Japan is bent on maintaining an ultra-dovish monetary policy. BOJ Governor Haruhiko Kuroda insisted at a briefing Thursday that there were no rate hikes in the works and guidance on future policy would not be changed for the time being, even for as long as two or three years in principle. And that means the direct intervention might ultimately amount to little more than a rearguard action even though it has more firepower in its reserves than it did the last time it moved to prop up the yen.

Japan’s government “can merely slow the slide, until the dollar impetus wanes or Japanese trade dynamics reverse,” said Jeremy Stretch, head of Group-of-10 currency strategy at Canadian Imperial Bank of Commerce in London, noting that he was not a believer in a redux of the Plaza Accord.

In Europe, the energy crisis and the war in Ukraine are bludgeoning the region’s economy, potentially hampering the European Central Bank’s ability to match the Fed’s rate hike path. 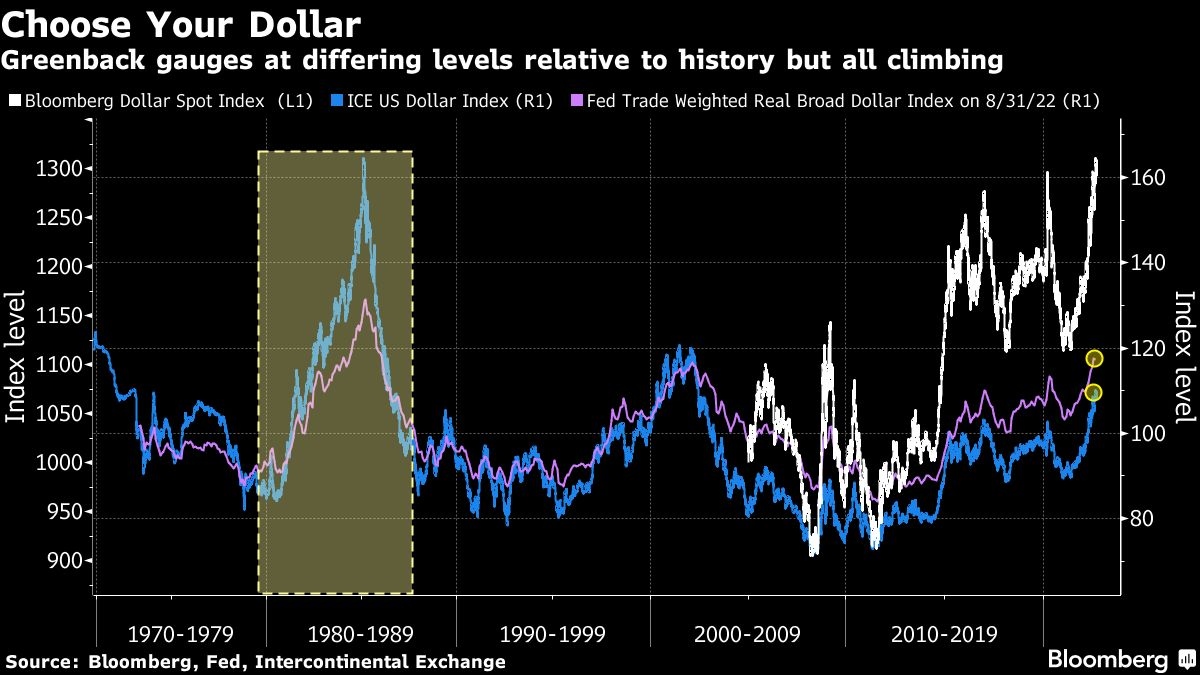 There are other fundamental reasons why a global pact to upend dollar strength is wishful thinking, market participants say.

For starters, China is now the biggest trading partner of the US, Japan and countries across Europe. An agreement without Beijing’s participation would likely be an ineffective deal and while the yuan is under pressure versus the dollar and the government there is leaning against weakness with its fixings, it’s far from distressed levels that would require China’s cooperation. Indeed, given that it is very much a tale of dollar strength, the yuan actually trading around historical highs against some of its major Asian peers.

More importantly, there’s a jarring absence of US support to curb the dollar’s surge.

The greenback’s strength barely warranted mentions at recent congressional hearings with Powell and Treasury Secretary Janet Yellen. And dollar strength is in fact helpful in leaning against consumer-price pressures, as it makes imported goods and services cheaper while also acting as a potential headwind to growth.

“I don’t think a Plaza-type accord is likely at least not until the Fed believes that it has broken the back of the inflationary threat in the US,” said Jane Foley, a strategist at Rabobank in London. “Dollar strength is a by-product of its tight monetary policy and efforts to weaken the dollar would be contradictory to its interest-rate and quantitative-tightening policies.”

While fighting the dollar’s supremacy without US support could ultimately prove futile, policy makers have little choice but to continue defending their currencies or risk wide-scale economic pain.

Chile’s central bank unleashed a US$25 billion intervention plan in July and Hong Kong’s monetary authority has bought local dollars at a record pace to defend the city’s currency peg.

Collectively, developing economies are burning through through the equivalent of more than US$2 billion of foreign-reserves every weekday to bolster their currencies against the greenback, and strategists anticipate efforts to ramp up.