There's no reason they shouldn't draft legislation to legalize cannabis in the U.S.: Tilray CEO

Like many entrepreneurs, Michael Motala was eager to take part in Canada's newly legal — and hopefully, lucrative — cannabis industry. But after less than a year of running a cannabis store on Toronto's fashionable Queen West neighbourhood, mounting competition and over-regulation are leading him to consider selling his business.

"It was an interesting experience as we were building a new business," said Motala, who operates High Street Cannabis Retail with his parents. "But the space is highly restrictive and regulated to the point where it is a comedy of the absurd, if you will, with advertising and the like."

Motala has listed his retail store, which he opened in October 2020, for just under $2 million. Selling cannabis during a pandemic while adhering to a lengthy list of regulations and amid an influx of neighbouring pot stores has whittled down High Street's bottom line.

"A lot of people probably got into this thinking that it would be a gold mine, but unfortunately we're finding out that's not the case," he said. "Even on our street [near the Queen St. West and Bathurst intersection], there's three stores across from us and when we talk some tell me they make five or ten transactions a day. That's pretty much impossible to survive on."

While Ontario took a relatively cautious approach in the early days of legal cannabis stores with two lottery processes that allowed for the opening of 75 pot shops in the first year of legalization, the province has since ramped up its licensing to permit 80 stores a month. It’s also taken a hands-off approach and let the free market to determine which retailers will be successful, a process which has unwittingly created clusters of pot stores in many Toronto neighbourhoods.

There are 859 cannabis stores open in Ontario today, 163 of which are located in downtown Toronto according to the Alcohol and Gaming Commission of Ontario, the regulatory body that oversees legal pot shops in the province. If you include some of Toronto's boroughs outside of the downtown core such as East York and Etobicoke, there are 267 legal and licensed pot shops open in Canada's biggest city. 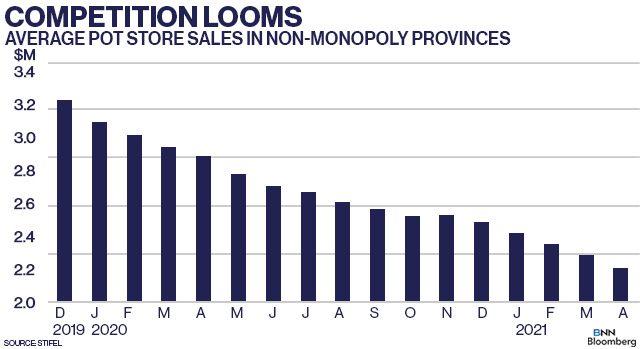 Lucas McCann, chief scientific officer at CannDelta Inc., a cannabis consultancy that has helped open about 80 stores in Ontario, said retailers in the province are facing heavy competition not only from neighbouring shops, but also from the provincially-owned Ontario Cannabis Store, which also operates the wholesale business that supplies their stores. He added some stores may be up for due to owners who got into cannabis retail to flip their outlets for a quick buck.

"There's a sense that it's better to throw in the towel now rather than wait down the road and not get what they presumed to be under market value for their store," McCann said in a phone interview.

Kiaro Brands Inc. Chief Executive Daniel Petrov told BNN Bloomberg that he observed the Ontario market for a few years before acquiring seven Hemisphere Cannabis stores from former Second Cup operator Aegis Brands Inc. for just under $10 million in a stock deal. Petrov said the asking price for some of the first pot stores in Toronto was as high as $8 million per store and that he decided to wait on the sidelines after seeing how valuations in other mature markets like Colorado plummeted following the first few years of operation.

"We've said this internally for a long time, but once the haze wears off people are going to realize that you're running a retail business and it's very competitive, especially on a large scale," Petrov said. "We took our time to get in Ontario but it's going to be a bloodbath here so you have to operate on traditional metrics."

While it is unclear how many cannabis stores are up for sale, public listings on Realtor.ca show six shops in Toronto, two in Alberta, and another six in B.C. are on the block. However, the vast majority of retailer transactions are handled privately according to High Tide Inc. Chief Executive Officer Raj Grover.

"Sometimes I get [inquiries] daily, sometimes I get five requests a week, and these are all inbound. I don't have to go out and prospect for acquisitions," Grover said.

"But we don't want to just buy stores or buy companies for the sake of it. We want to buy them because they're financially strong businesses and we can improve them."

Motala still isn't fully sure if his family will sell High Street, but wants his parents to retire comfortably when they still can. If he sells, he wants to sell the store to another independently-minded operator, stating that the market is primed for larger retailers with deeper pockets that can weather future financial storms.

"My worry is that it's going to turn into the Beer Store model, where you have two or three dominant retail chains and that's it," he said. "I don't think the government put enough protection in there for the little guys."

U.S. Senators unveil comprehensive cannabis reform bill, but does it have enough votes to pass?

By far, the biggest news in the cannabis industry last week was the release of draft legislation by a trio of U.S. Democratic senators that would remove marijuana as a controlled substance and legalize it federally. The draft bill, the most comprehensive legislation that addressed how to legalize and regulate cannabis, comes with a laundry list of changes to how marijuana is governed in the U.S., including how it will be taxed. It also gives the U.S. Food and Drug Administration oversight on regulation. Other takeaways from the draft bill, which is open for public comments until September, include allowing people over the age of 21 to purchase cannabis, states being able to continue prohibiting cannabis sales but with distribution permitted to allow for interstate commerce, and the creation of grant programs for people who have been adversely impacted by the U.S.'s War on Drugs. However, Senate Majority Leader Chuck Schumer admitted that he doesn't have the votes​ needed to get the legalization bill passed in the Senate, and the White House isn't expected to place a high priority on legalizing cannabis right now.

Several cannabis industry executives appeared on BNN Bloomberg over the past week to applaud the Schumer-led legalization bill despite the uncertainty in getting it passed into law. Curaleaf Executive Chairman Boris Jordan described the draft bill as a "game-changer," adding that many U.S. operators have yet to price in legislation into their stocks. "Even with the spectacular growth we're seeing, virtually no institutional money participates in the U.S. [multi-state operators] at this point in time. This bill will allow them to do that," Jordan said. Canopy Growth CEO David Klein was also bullish on the draft bill, saying that while it may not arrive before the end of the year as he had predicted, the company is already building out its U.S. plans alongside Martha Stewart-branded CBD products, its Quatreau CBD drinks and other brand licensing deals. Tilray CEO Irwin Simon told BNN Bloomberg and Bloomberg Markets that there's a lot more work to get this legislation passed, but that the industry is still in the "second or third inning" and that he looks forward to operating in the largest cannabis consumer market in the world.

Aurora ships $8M worth of medical cannabis to Israel

Aurora Cannabis said it has delivered nearly $8 million worth of cannabis to Israel, one of the largest legal marijuana shipments the Middle Eastern nation has received. The company did not disclose the amount of cannabis shipped in a statement. Aurora has a deal with Israeli medical cannabis distributor Cantek Global to supply at least 4,000 kilograms of dried flower each year to the country. The shipment comes in the wake of U.S. multi-state operator Curaleaf Holdings shipping more than one metric ton of medical cannabis to another Israeli distributor, while smaller companies like Flowr and Avant Brands (FKA GTEC Holdings) have recently secured export deals to ship medical marijuana to the country. Meanwhile, The Jerusalem Post reported that Israeli politicians have postponed a vote on legislation that would decriminalize recreational cannabis possession by two weeks following a heated debate in the Knesset.

Jones Soda, the maker of soft drinks known for its unusual flavors, is getting into the cannabis business​. The company said in a statement it plans to launch a line of pot-infused drinks, edibles and related products after raising US$10 million in fresh financing to fund its cannabis ventures. Jones said it raised US$2 million through an unsecured convertible debenture that was issued to SOL Global Investments, the investment firm led by controversial Canadian dealmaker Andy DeFrancesco. Jones will also receive US$8 million through a deal that involves Pinestar Gold, which counts former Origin House CEO Mark Lustig as one of its main shareholders.

On Wednesday, Hexo released financial figures for Redecan Pharm, the privately-held cannabis producer it announced in May it was buying for $925 million. According to a company filing, Redecan reported $73.6 million in revenue in 2020 with net earnings of $11.6 million. In the first quarter of the year, Redecan generated $24.7 million in revenue, up 146 per cent from the same quarter a year earlier, and $6.9 million in net earnings. ATB Capital Markets Analyst David Kideckel said Redecan's financial statements show that the company is an "efficient operator with a lean cost structure which supports healthy margins and positive operating income and net earnings." The combined Hexo-Redecan would generate $155.6 million in revenue and $38.6 million in net income over the nine months ended April 30, while Hifyre data suggests the operated would be the third-largest producer in Canada. Meanwhile, BMO Capital Markets Analyst Tamy Chen reduced her 12-month target price on Hexo's shares to $11 from $12 as June data from Hifyre shows some decline in Hexo's national market share. Chen expects Hexo ​to close the Redecan purchase in September, with the latter producer contributing one month of financials to Hexo's first quarter.

CANNABIS SPOT PRICE: $5.55 per gram — This week's price is up 0.5 per cent from the prior week, according to the Cannabis Benchmark’s Canada Cannabis Spot Index. This equates to US$2,011 per pound at current exchange rates.

859
— The number of cannabis stores open in Ontario, the most out of any province, according to the AGCO.