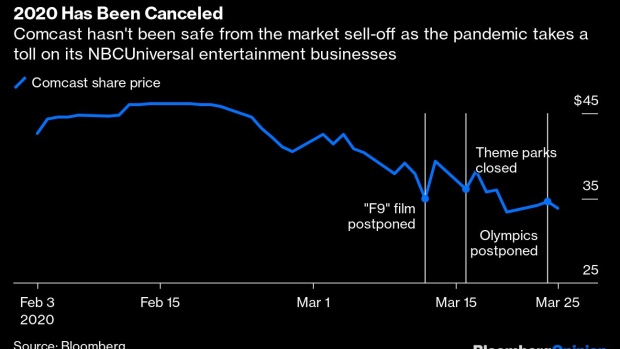 (Bloomberg Opinion) -- If the world were ending, I’m convinced that all that would be left are cockroaches and the cable giants.

Things aren’t quite that bad, but they aren’t good either. And yet, as the coronavirus pandemic sends the U.S. into a recession, Brian Roberts may have reason to be among the least worried from his perch at Comcast Corp., the Roberts’s $150 billion family business.

On Tuesday, Comcast submitted a regulatory filing alerting investors that the coronavirus pandemic “could have a material adverse impact” on operational results and that management isn’t sure to what extent or for how long. Like Walt Disney Co., Comcast had to close all of its Universal theme parks in Florida, California and Japan. Its Universal Pictures studio has had to delay movies that were set to be released soon in theaters, including pushing back “F9,” the latest installment of its money-making “Fast and the Furious” franchise, to April of next year. TV and film production all across Hollywood is also at a halt. Then there’s the big cheese: the Olympics.

The International Olympic Committee and Shinzo Abe, the prime minister of Japan, where the 2020 summer games were set to be held, agreed to postpone the event for about a year. It’s a blow both to Comcast’s NBC network, which was set to broadcast the Olympics for U.S. viewers, and to Discovery Inc., which had secured the TV rights in Europe. NBCUniversal had already sold most of its advertising space for the event, more than $1 billion that the business will no longer see this year. It’s also a downer for NBCUniversal’s upcoming launch of Peacock, an ad-supported streaming-TV service that was going to feature coverage of the Tokyo Olympics in a bid to attract subscribers.

Still, even as the coronavirus is rippling through Comcast’s NBCUniversal operations, they represent a relatively small portion of the company’s overall profits. Nearly 70% of last year’s earnings before interest, taxes, depreciation and amortization — about $23 billion — came instead from Comcast’s cable group. And increasingly, cable revenues are generated by the more dependable internet side of the business than the shrinking pay-TV side.

Comcast added 1.4 million high-speed internet customers in 2019, mostly residential. That outpaced the 733,000 video customers it lost during the year. It’s how Comcast has maintained a grip on subscribers even as more of them turn to streaming apps such as Netflix. As recently as 2017, triple-play subscribers were the majority, paying for internet, TV and landline phone service; now a greater portion have just internet. That makes the “cord-cutting” trend a bit of a misnomer. Comcast and other cable giants are still very much present in our homes because you still need internet access to stream. A reliable connection is also more important than ever as Americans shelter in place, trying to work and study remotely, often with a single household using multiples devices at once.

What’s more, Roberts, the chairman and CEO of Comcast, told investors during a conference earlier this month that the company is insured against its expenses tied to the Olympics. So while there’s no profit to be made from an event that doesn’t happen, there won’t be losses either. Matthew Harrington, an analyst for Benchmark & Co., lowered his forecast for NBC broadcast sales to $10.3 billion, which is still a more than 1 percent increase from last year. He sees revenue for Comcast overall only slightly down for the year, with Ebitda falling 7%, in part due to costly upfront investments in the Peacock app.

A recession could drive more people to ditch expensive pay-TV packages and cause advertisers to cut their budgets. That wouldn’t be good for either side of Comcast. But for now, Comcast’s bread-and-butter cable business is providing good insulation.