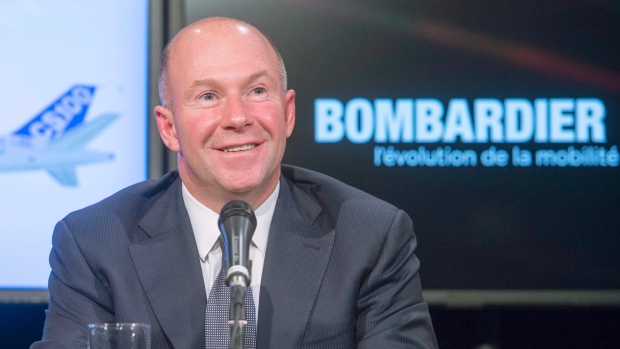 MONTREAL -- Bombardier further retreated Sunday on a hefty pay increase to six senior executives, announcing they would defer receiving payment on a sizeable chunk until a later time.

A statement from company President and CEO Alain Bellemare late Sunday said he has asked the transportation giant's board of directors to defer more than half of the US$32.6 million the executives received in compensation in 2016 until 2020.

"This compensation will only be payable if we achieve our performance objectives; delivering value to all our shareholders, including the people of Quebec and Canada," Bellemare said in a brief statement.

Public anger about the roughly 50 per cent increase in compensation from the US$21.9 million paid to the executives in 2015 has mounted steadily in the past few days in light of the fact Bombardier has received hundreds of millions of tax dollars.

“No question. This is avoidable. This is a decision that the board of directors made. Management compensation is fully within the board of directors. And that’s why I say there’s a governance problem at Bombardier – because the outside shareholders do not have any hand in electing those directors,” Anita Anand, J.R. kimber chair of investor protection and corporate governance at the University of Toronto told BNN Monday.

“So even though there’s a partial deferment of the bonuses to 2020, that’s not sufficient because those directors are still not elected by the outside shareholders,” she added. “So at any given time, a decision could be made by the board to change its decision… this is just a Band-Aid — it’s a public relations tactic. And it’s insufficient.”

Two Quebec cabinet ministers called for Bombardier to rethink the pay packages last week and roughly 200 people gathered outside the company's Montreal headquarters on Sunday to voice their anger against Bombardier. The outcry was acknowledged by Bellemare in his statement.

"Over the past 75 years, our fellow citizens have always been by our side. It is because of this deep relationship that we are sensitive to the public reaction to our executive compensation practices," Bellemare said.

Quebec Premier Philippe Couillard said in a tweet Sunday that he spoke to Bellemare about Quebecers' concerns about the pay package and that he was happy with Sunday's decision.

Public anger appeared fuelled by the fact Bombardier (BBDb.TO) received a US$1 billion investment from the Quebec government in 2016 in exchange for a 49.5 per cent stake, and in February, the federal government pledged $372.5 million in repayable loans to the company -- a far cry from the US$1 billion it had been asking Ottawa for since 2015.

The company has also laid off thousands of workers worldwide.

The reaction last week prompted Bombardier chairman Pierre Beaudoin, one of the other six executives who received a hefty pay hike to announce Friday that he would ask the board of directors to bring his 2016 compensation in line with what he received in 2015, a cut amounting to around US$1.4 million dollars.

The company also issued a defence of its compensation policy and called it "inappropriate" to compare the 2016 compensation to that of the previous year because some of the executives did not start at the beginning of 2015. Bellemare for example started in his job in February, 2015.

Karl Moore, an associate professor at McGill University's Desautels Faculty of Management, defended the executives' pay by stating if you want a company to be a global player, you need global talent and "you’re going to have to pay global compensation packages to bring people to work here from other parts of the world.”

“I’m sitting down in the states and you say you want to live in cold Montreal, where they speak a lot of French, which is great, but you may not, and you’re going to take less money, you’re going to go ‘you’re nuts,’” Moore told BNN in an interview Monday.

Bombardier's damage control efforts over the weekend appeared to do little to calm the waters.

The crowd outside of the company's headquarters Sunday chanted in French "shame to Bombardier!"

Jessica Lacombe, a teacher, carried a sign that read "I'm still waiting for my invitation to Bombardier's shareholders' meeting."

She said the company's actions are especially hard to take after years of government austerity that have included cutbacks to health and education.

"If it's private money they can do what they want, but now it's public money," she said. "It's our taxes, it's our money."

Before Sunday's announcement by Bombardier, the opposition Parti Quebecois said it would introduce a motion in the Quebec legislature this week calling on the executives to renounce their 2016 compensation increase. PQ leader Jean-Francois Lisee tweeted late Sunday that Bombardier's latest effort at damage control wasn't good enough.

"The Parti Quebecois, like 93 per cent of Quebecers, refuse a "deferral" of scandalous raises. We demand a cancellation!" Lisee tweeted. 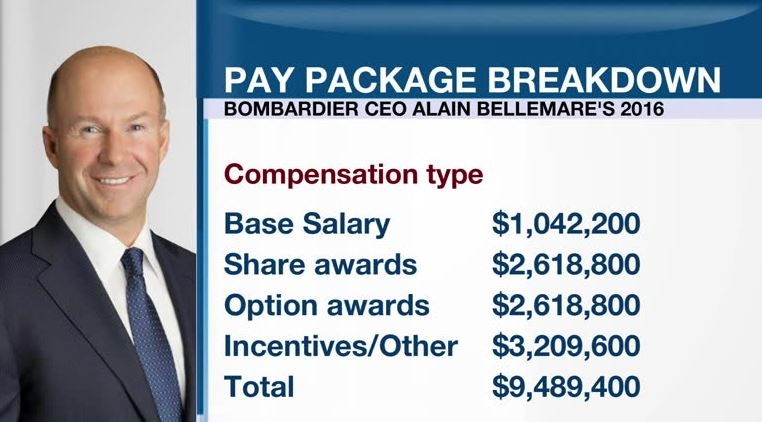 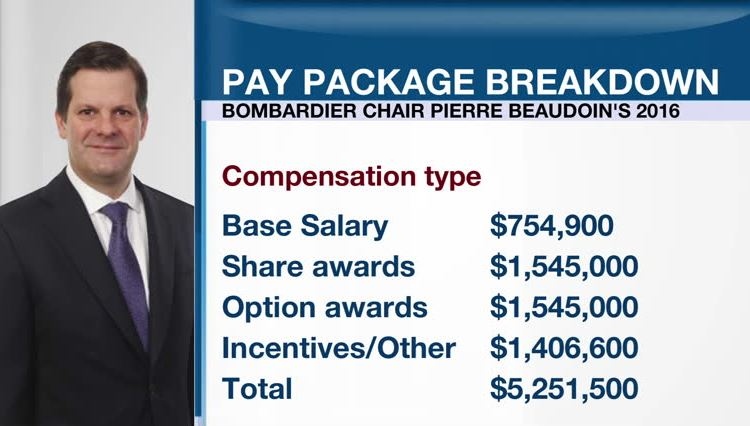