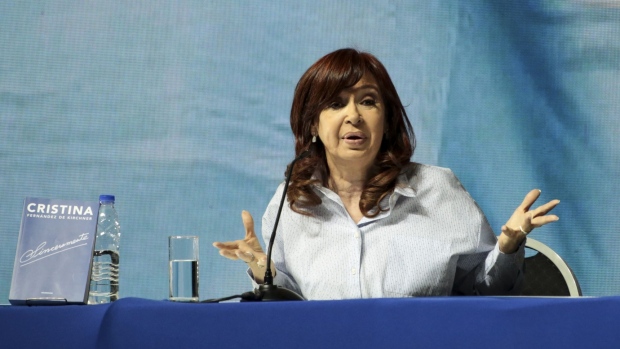 (Bloomberg) -- Argentina’s Vice President Cristina Fernandez de Kirchner broke her silence on a deal between the country and the International Monetary Fund, saying the approval will be the responsibility of the entire congress.

“It’s not Cristina,” she said in an open letter posted on her website. “It’s the 257 legislators and 72 senators who have the legal, political and historical responsibility to approve or not how and under what conditions the world’s largest debt in history with the IMF is going to get paid.”

She also addressed speculation of a power struggle between her and Argentinian leader Alberto Fernandez, saying he’s the one calling the shots and it’s the responsibility of the president to come up with the IMF deal in the first place. “No one should be fooled over who’s making the policy decisions in Argentina,” she said in the letter, which was also shared by the president on Twitter.

The public comments were her first since a bruising midterm elections two weeks ago, where the ruling coalition lost control of the senate, dealing a major setback for Kirchner, who presides over the chamber.

Kirchner, who has had a rocky relationship with the Washington-based organization and international markets while she was president between 2007 and 2015, appears to be distancing herself from the decision to approve the government’s proposal to reschedule payments for a loan amounting to more than $40 billion.

The Fernandez administration vowed to send an economic plan to congress in December, which will include preliminary agreements with the IMF. Earlier this year, Kirchner had said Argentina doesn’t have the money to pay back the debt with the fund.

Conversations with the fund were expected to pick up pace following the midterm elections. The government has said it wants to resolve the issue possibly this year.

“It is a historic moment of extreme severity and the definition that is adopted and approved could constitute the most authentic and true restraint ever recalled for the development and growth with social inclusion of our country,” Kirchner said.