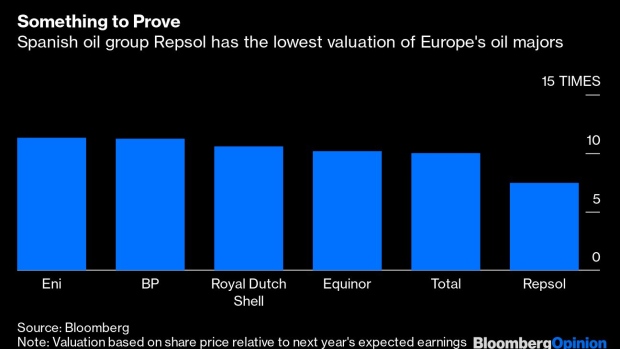 (Bloomberg Opinion) -- The oil industry knows the dirty business of extracting fossil fuels is likely to gush cash for the foreseeable future. But it also knows it needs to be a central part of the solution to the climate crisis. Trying to keep both ideas in mind, Repsol SA on Monday made an eye-catching commitment: to become carbon neutral by 2050. Unfortunately, achieving that goal rests on things that aren’t wholly in the Spanish oil-and-gas group’s control.

Repsol is the sixth-biggest European oil company by market capitalization, and its shares are the cheapest among its larger peers when valued on multiples of expected earnings. Investors like the group’s profitable refinery business but judge its exploration-and-production efforts to be lower quality than those of its peers. The strategy needs resetting.

Clearly, the financial, strategic, and ethical case for allocating fresh capital to exploration and production is severely challenged. Fossil-fuel consumption will need to be reduced globally if the objectives of the 2016 Paris Agreement to combat climate change are to be met. So Repsol is setting itself some constraints, assuming that oil prices will fall if Paris is delivered, and that the all-in price of extraction will rise when factoring in the future cost of carbon. Consequently, it is writing down its existing assets by 4.8 billion euros ($5.3 billion).

As for the future, Repsol says it’ll prioritize value and cash generation rather than increasing the number of oil barrels it produces. Make no mistake, it isn’t putting its oil business into run-off. It will still invest where its criteria — making a profit while factoring in a more realistic price of carbon — are satisfied.

But can it identify projects that fit those parameters? Maybe. The group says 70% of the net carbon-dioxide reduction it seeks could be facilitated by technology that is currently “foreseen.” In other words, about one-third of its strategy relies on the view — widespread in the industry — that technology will conjure up much more efficient methods of capturing carbon than currently exist. That’s a global challenge, as UBS analysts point out. Repsol suggests that the backstop is planting more forests. The other alternative is buying carbon offsets, but this could be costly, as Bloomberg Intelligence notes.

Meanwhile, like other oil majors, the company is seeking to build up its renewables business. With armies of engineers, it has plenty of resources to bring to bear as the energy industry evolves. But its skill-set is still emerging and, barring large M&A, the company will have to continue hiring talent from outside.

It would be churlish not to welcome Repsol’s strategic shift and ambition, especially as it’s tying a chunk of senior managers’ long-term pay to delivering on its carbon-reduction goals. But whether it can become a genuinely clean oil company is some way from being proven.

To contact the author of this story: Chris Hughes at chughes89@bloomberg.net

To contact the editor responsible for this story: Timothy Lavin at tlavin1@bloomberg.net