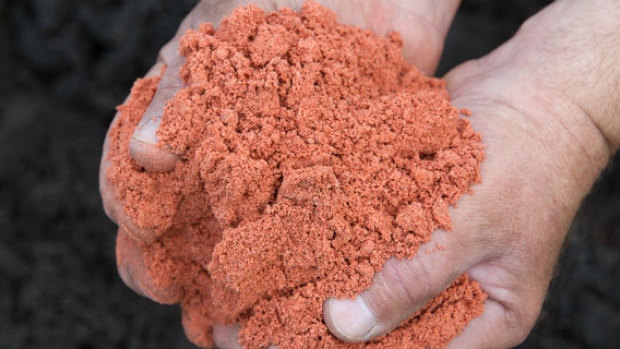 CALGARY -- Oil's downfall may get more attention but the potash industry that forms the bedrock of the Prairie mining industry is going through its own bust -- and analysts say there's no quick recovery in sight.

Potash, the lightly coloured mineral used as a crop fertilizer, is big business in Canada. Last year, producers dug out $6.7-billion worth of it, putting it second only to gold in terms of produced mineral value in the country.

But like oil, a wave of overbuilding and production increases in recent years -- spurred by a spike in crop prices and a perceived demand that didn't quite materialize -- have left the market flooded with supply.

"We have become grossly oversupplied with potash," said David Asbridge, president of fertilizer advisory firm NPKFAS. "It's going to take a while for us to dig ourselves out of this hole."

The glut has led to a steep drop in prices, with the Potash Corp. of Saskatchewan reporting an averaged realized price in the second quarter of US$154 per tonne, compared with a brief peak of around US$900 a tonne in 2008 and still over US$400 just a few years ago.

The fallout has been mine closures, layoffs and a big cut in government revenue as companies try to preserve their cash and stay profitable, said Brooke Dobni, a professor at the University of Saskatchewan's Edwards School of Business.

"They're doing everything from A to Z, from closing plants, reducing production, (to) cutting dividends to shareholders," said Dobni.

The Mosaic Co. cut 330 jobs last month when it suspended production at its potash mine near Colonsay, Sask., while Potash Corp. has instituted some temporary closures at mines in the province to reduce supply.

In early August, Karnalyte Resources Inc. said it had failed to secure funding for the US$700-million phase one of its proposed potash mine near Wynyard, Sask., while last fall Brazilian mining giant Vale stopped development of its $3.5-billion potash mine near Kronau, Sask.

Australian heavyweight BHP Billiton has also cut back staff and development spending at its massive Jansen potash project, with no clear timeline for production.

For Saskatchewan, the reduced prices mean lost revenues, with the province pulling in $552 million in the 2015-16 year, $244 million less than expected. This year the government is expecting revenue to drop further to $450 million, though it will still make up 3 per cent of budget revenue.

The government isn't expecting any quick turnaround in prices either, projecting a price of US$205 per tonne for this year and climbing only to US$221 per tonne by 2020.

The effects are being felt outside of Saskatchewan, with Potash Corp. making the drastic decision to close its Picadilly mine in New Brunswick in January, putting 430 people out of work.

And Canpotex, the marketing body for Canadian potash producers, decided in June not to go ahead with a $775-million port expansion in Prince Rupert, B.C.

But the measures haven't been enough to balance the market, says Peter Prattas, an analyst at AltaCorp Capital, because companies also continue to add supply.

Potash Corp. and Mosaic are working to wrap up multi-billion-dollar expansions, while K+S Group plans to start production at their new Legacy mine near Moose Jaw, Sask., next year.

Prattas says more capacity will have to be cut for prices to recover.

"There will need to be some further mine closures at some point in order to bring the overall market in balance, but the process is a slow one because no one wants to give up volume," said Prattas.

Not only are companies reluctant to give up production, but some are still pushing to start developing new mines.

Yancoal, owned by Chinese firm Yanzhou Coal Mining Co., is looking to develop a mine near Southey, Sask.

The mine has faced some local opposition, but the Saskatchewan government approved its environmental assessment earlier this week and company spokeswoman Robin Kusch said the long-term outlook is still good.

"We're very optimistic," said Kusch. "The potash resource that is there is attractive, and in terms of the potash price, projections in line with production in 2021 are favourable."
She said the company expects to make a final investment decision on the project this fall.