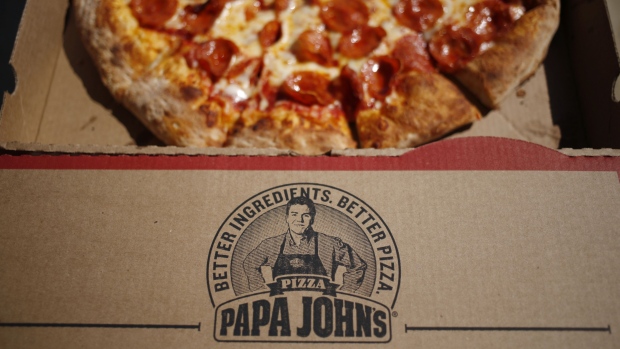 An image of John Schnatter, founder of Papa John's International Inc., is displayed on a pizza box in Shelbyville, Kentucky, Aug. 3, 2018. Bloomberg/Luke Sharrett

John Schnatter is at it again.

Papa John’s International Inc.’s notorious founder and former leader lambasted the pizza chain publicly for the second time in as many months, naming a handful of executives that he says should be jailed while calling out the new chief as having “no pizza experience.”

Schnatter -- who made the comments in a local media interview in Louisville, Kentucky, where the restaurant chain is based -- also took a dig at the food quality. He said he’s eaten more than 40 pizzas in 30 days, and “it’s not the same pizza” in terms of quality as when he left.

Under a spotlight, a visibly sweating Schnatter launched into a tirade against Papa John’s executives, accusing them of setting him up. “The day of reckoning will come,” said Schnatter, dressed in a customary red button-down. “The record will be straight,” he said, cryptically suggesting multiple times that viewers “stay tuned” for more.

The interview caught on with Twitter users, who jumped on Schnatter’s proclaimed pizza-heavy diet and weighed in on the careworn appearance of the executive, who was ousted last year and remains a shareholder in Papa John’s.

I hope Papa John is okay. That’s a lot of pizza. https://t.co/x1fX9BSzPL

A spokeswoman for Papa John’s didn’t reply to a request for comment. The company’s shares were little changed in Tuesday trading.

The pizza chain, which got an investment earlier this year from activist investor Starboard Value LP, has been working to mount a comeback following a sales slump and a scandal involving Schnatter’s use of a racist slur that the founder says was taken out of context.

A new chief executive officer, former Arby’s executive Rob Lynch, has made management changes since taking over in August and this month reported better-than-expected quarterly sales. The shares have gained about 28 per cent since his arrival.

In the interview, Schnatter said he isn’t satisfied, given that Lynch has no background in pizza or previous CEO experience. Schnatter also said managers “stole the company” and contends some executives, including director Olivia Kirtley and former director Mark Shapiro, should be in jail. He provided no explanation why he made such an assertion.

I hope Papa John is okay. That’s a lot of pizza. https://t.co/x1fX9BSzPL

Once the largest shareholder, Schnatter still owns at least a 9 per cent stake, according to data compiled by Bloomberg. He says he isn’t trying to take it over at this time.

“My metaphor is there’s no reason to be in the car when the car crashes, even if you love the car,” he said.