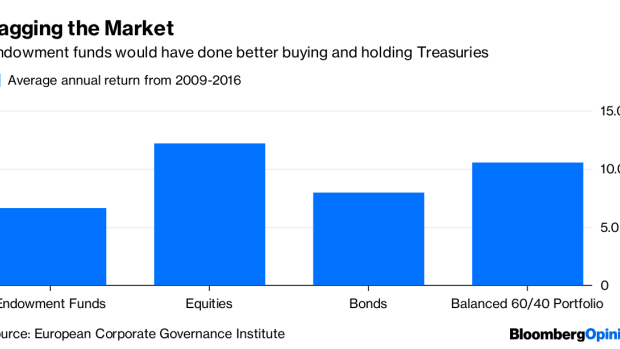 (Bloomberg Opinion) -- It’s almost 80 years since Fred Schwed’s book “Where are the Customers’ Yachts?” lifted the lid on Wall Street’s propensity to enrich itself at the expense of its clients. A new study suggests that the most lucrative investment a fund could make would be paying to relocate its operations as far away from the financiers as possible.

In a paper just published by the European Corporate Governance Institute, finance professors Sandeep Dahiya of Georgetown University and David Yermack of New York University studied the tax returns of more than 28,000 U.S. nonprofit organizations filed with the Internal Revenue Service between 2009 and 2016. The results make for grim reading.

Endowments made an average annual return of 6.65 percent in the seven years covered by the study, compared with 13.7 percent per year from stocks and 7.96 percent from long-term government bonds.

Compared with a traditional 60/40 equity/bond investment, endowment funds underperformed by 4.75 percentage points annually. “The average endowment fund would have earned substantially higher returns during our sample period if its trustees had followed a simplistic investment strategy of holding 100 percent Treasuries and taken no equity market risk whatsoever,” the authors note.

Non-profit endowments manage more than $700 billion in the U.S., with an average endowment size of $27.2 million and a median of just $1.2 million. About half of the funds are controlled by colleges and universities; the study found that the class of higher education institutions “significantly underperforms” other non-profit endowments supporting other activities such as the arts, health care and religion.

Moreover, the bigger the fund, the worse the returns.

That underperformance by the bigger funds is at odds with their perceived advantage in securing lower trading fees and better access to information than their smaller peers. It could be down to the higher costs associated with buying and selling illiquid securities, which tiddlers are less likely to dabble in, the report says.

But the authors go on to suggest a much more interesting cause - the proximity of a big endowment’s head office to one of the four major U.S. financial centers for asset management.

Their research found “a striking pattern.” For the largest funds analysed, investment performance deteriorated the closer the fund was to New York, Boston, Chicago or San Francisco. The opposite was found for smaller endowments.

For the latter, the authors suggest that proximity to a money center helps the smaller funds recruit “better-informed board members.” But for the biggest endowments, being closer to finance experts leaves them “susceptible to professional money managers’ sales pitches that lead to over-investment in exotic products with high fee structures.”

So the message is clear. Endowment fund trustees should close their ears to the siren song of the investment professionals. Wall Street really can damage your financial health.