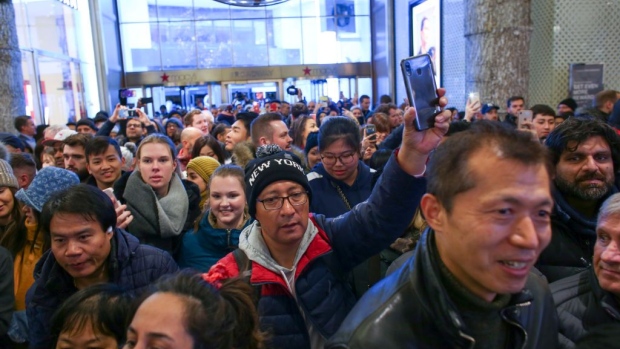 (Bloomberg) -- Even with the U.S. economy expected to reopen in coming months, investors should be prepared for this holiday shopping season to be filled with lumps of coal.

In a best-case scenario, retailers who shuttered their locations to slow the spread of the coronavirus would start operating them again in May and June. But many chains in hard-hit discretionary categories, like apparel, would still see sales fall 5% to 10% during the holiday shopping season from a year ago, according to Fitch, the ratings company.

The reasons are many. Unemployment will remain high because lots of furloughed workers won’t be brought back as companies cut costs or don’t reopen. A downturn in consumer psychology will boost an already-high savings rate. And the risk of a second outbreak of the virus in the fall will hang over everything.

“We’re assuming the customer is pretty slow to come back to all these stores,” said David Silverman, an analyst for Fitch, which recently downgraded chains such as Victoria’s Secret owner L Brands Inc. “Things might not be completely fine until there is a vaccine, and that could take a year or more.”

There’s also a big question over whether chains will have enough goods in stock for Christmas. Virus-triggered shutdowns upended supply chains and weakened the industry’s finances. Retailers also upset vendors after canceling orders and will now need them to ship again.

This doesn’t bode well for an industry that has long been troubled. When state governments ordered the temporary closing of stores not deemed essential, it served as a blow to some of the weakest parts of discretionary retail, such as department stores and clothing chains. Even with essential retailers like Walmart Inc. and Home Depot Inc. remaining open, U.S. store visits fell 98% in April, according to Prodco.

“The skeptical view is people are afraid to go into crowds or want to save their money and don’t want to overspend.”

Despite the boom in e-commerce, U.S. brick-and-mortar locations still generate about 80% of the retail industry's sales during Christmas shopping, according to researcher Customer Growth Partners.

That raises questions about what happens to an event like Black Friday, the season’s unofficial kickoff in late November, when chains draw crowds with deals on televisions and kitchen knives. All that foot traffic drives lots of lucrative spur-of-the-moment purchases that e-commerce hasn’t replicated nearly as well. For many chains, those in-person impulse buys are what makes their business model work.

Given the concerns about the virus and the added hassle of shopping with social-distancing measures like capacity limits, retailers will also have to work extra hard to entice customers to stores, according to Rich Honiball, a former J.C. Penney Co. executive who now is the global chief merchandising and marketing officer for Navy Exchange Service Command, a chain of stores for service members with $2 billion in sales that’s remained open during the pandemic.

“The skeptical view is people are afraid to go into crowds or want to save their money and don’t want to overspend.”

That means doing more than offering the biggest discounts, Honiball said. Chains will have to increase engagement with shoppers through marketing and merchandise—a skill in short supply at many troubled companies.

“There is an optimistic view that we survive this, the stimulus works and people bounce back,” Honiball said. “The skeptical view is people are afraid to go into crowds or want to save their money and don’t want to overspend.”

The American consumer has continually showed the ability to bounce back, like after the 2001 terror attacks, according to Craig Johnson, president of Customer Growth Partners. The firm expects overall retail sales during the holidays to increase about 1%. And some chains might post better same-store sales than expected because they’ll opt to keep some of their worst-performing locations closed.

But it’s not just consumers who could doom Christmas. Big chains are also pulling back on their own because of how sporadic the reopening of the economy may be. Department-store chain Macy’s Inc., which is exploring rescue financing to shore up liquidity, isn’t going to be “as aggressive” about the holiday as it once planned, Chief Executive Officer Jeff Gennette said.

Meanwhile, Tapestry Inc., owner of Coach and Kate Spade, has canceled orders across its brands for late summer and early fall to save about $500 million, said President Todd Kahn. To compensate, the company will make existing inventory last longer than usual by stretching out new releases of clothing and handbags, which means less newness to win over shoppers.

Vendors will play a critical role, too. Chains have an increasingly frosty relationship with them after canceling months of orders and sticking them with thousands of finished goods. Adding to suppliers’ hesitancy is that it’s now much harder and expensive to buy insurance on getting paid for a shipment. For some companies, like Macy's, it’s difficult for vendors to get coverage at all.

While it will be painful if many retailers struggle this Christmas, it could end up being a net benefit to the industry, according to Johnson. Even with thousands of locations closing over the past few years, the U.S. still has too many stores. But this economic shock could speed up a culling that could help the fittest survive.

“In its own crazy way, this will be a boon to the industry overall,” Johnson said. “Yes, there will be blood on the floor, but it takes radical surgery to cure this.”