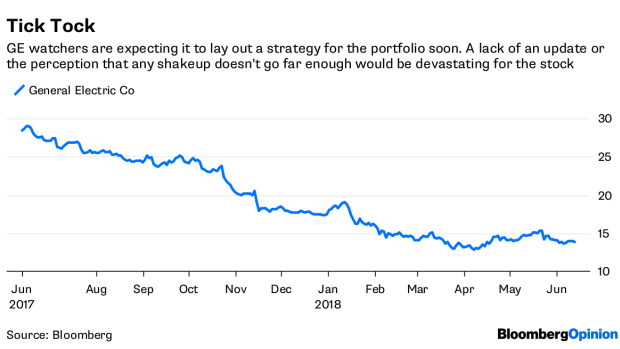 (Bloomberg Opinion) -- Cutting the power-market cancer out of Siemens AG and General Electric Co. is easier said than done.Siemens is considering options for its downtrodden large gas-turbine business that could include a sale or combination with a rival, Bloomberg News reported Wednesday. It's obvious why CEO Joe Kaeser would want to get rid of that business, if he can. Slumping demand for power equipment has been a blight on his multi-year effort to streamline the company and steer it toward a higher-growth future. But immediately after reading the story, I thought of GE, which is contemplating a massive shakeup of its own that some have speculated could include changes in its problem-child power unit.

GE has already agreed to combine its transportation division with Wabtec Corp. and is in the process of selling its Jenbacher and Waukesha industrial gas-engine business for more than $3.5 billion. But it needs to raise a lot more cash to get its leverage ratio in line with credit-rating firms' targets. Given CEO John Flannery's stated interest in also providing some upside for shareholders and a mammoth pension deficit that has to go somewhere, any kind of breakup move will require a high degree of creativity.

So is it possible for Siemens and GE to combine their sore-spot gas-turbine businesses into one? In a word, no. They are No. 1 and No. 2 on a unit basis in a ga-turbine market where about 90 percent of capacity ordered in the first quarter came from the top three companies (the other being Mitsubishi Hitachi Power Systems), according to a report from Barclays Plc analyst Julian Mitchell citing McCoy Power Reports data. Even in the anything-goes M&A world set to dawn after the slap-down of objections to AT&T Inc.'s merger with Time Warner Inc., that would seem to be problematic.

But whatever Siemens does with its large gas-turbine business has implications for its American rival. Siemens is reportedly looking at all possibilities, but the options highlighted in the Bloomberg News scoop are of the sale variety. This makes sense, as the business is likely to garner a higher valuation from a buyer that can use the consolidation to cut costs than it is from the public market. But it's interesting in light of speculation by some GE watchers about a possible public carve-out of the company's power unit.

The idea is that while the business may not command a valuation worth writing home about today, perhaps there's something to be said for a deep, if painful, rethinking of GE's identity. In theory, investors who target deeply cyclical industries might be interested in (eventually) riding a stabilization of the power-equipment market. Other GE shareholders would obviously prefer to hold just the healthy organs of aviation and health care. But what do you do with the debt and the pension? A highly levered, cyclical power company would be a disaster, not to mention a spinoff wouldn't give GE cash. So then you end up with a smaller GE, but a still-too-heavy debt load. You're right back where you started.

Investors often cite Siemens' unwinding as a blueprint for GE, with the U.S. conglomerate only now contemplating the lighting and healthcare divestitures its German counterpart put in motion a while ago. Once again, Siemens seems to be ahead of the curve, and that could pose problems for GE. I'm still skeptical of the appetite for acquisitions in a gas-turbine market that GE recently said would be soft through 2020. Antitrust and regulatory issues abound.  But if Siemens could somehow finagle a combination with the likes of Shanghai Electric Group Co. or Mitsubishi, that would toughen the competitive landscape for GE and, perhaps more importantly, leave it with one less potential exit strategy. The odds of the market absorbing deals for both companies’ large gas-turbine businesses are extremely low; GE was already forced to divest some assets to Shanghai Electric-backed Ansaldo Energia SpA as part of its purchase of Alstom SA’s power assets in 2015.

In some ways, you could view this situation as the inverse of Siemens and GE’s battle over Alstom. GE won the deal, but Siemens won by not exploding its employee base and doubling down on some of the least appealing parts of the power market right before it imploded. This time around, GE and Siemens may be competing for the role of seller, rather than buyer.

--With assistance from Chris Bryant.

Albeit, Siemens took a rather long time to actually execute an IPO of its health-care business and it continues to own a large stake.

The primary goal of a merger would be to cut costs, and Siemens already met resistance to its plan to cut 6,900 jobs across the power unit.