It’s time for gold to shine and Barrian Mining is poised to reap the benefits - BNN Bloomberg
{{ currentBoardShortName }}
Markets
As of: {{timeStamp.date}}
{{timeStamp.time}} 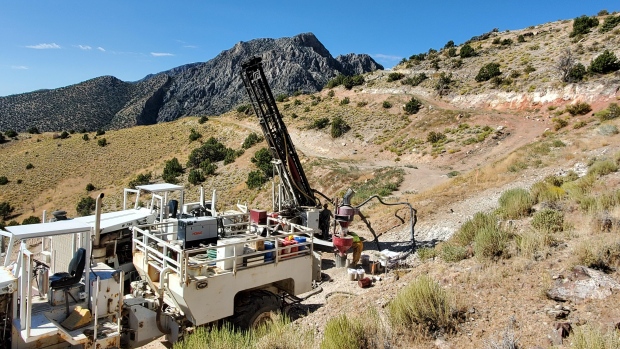 With concerns about global geopolitical instability on the rise, gold is well-positioned for a potential price surge as investors look for a safe haven to weather the storm.

Gold is already priced at more than $1,400 an ounce and is up 18 per cent this year, according to U.S. Global Investors CEO, Frank Holmes, who suggests that investors should reach for the precious metal as a safe asset to mitigate stock market swings and manage risks.

Right now, gold is more than an asset to diversify portfolios — it’s a precious metal that has demonstrated the ability to produce solid long-term returns, stabilizing investment portfolios over time. Indeed, over the last 20 years, gold has been the second-best performing investment asset.

With the ongoing trade war ordeal between the U.S. and China, the global financial system is wholly backed by debt, according to Marin Katusa, Founder of Katusa Research and accomplished investment analyst. While the tension between the two nations can considerably worry investors, there hasn’t been a better time to buy into gold.

“When people realize what is going on and they turn to gold, we’ll be there first.”

Barrian Mining Corp. (TSXV: BARI, OTCQB: BARRF, FSE: BM5), is positioning itself for the potential rush on gold properties that would result from a surge in prices, drawing on modern techniques and technologies to more surgically explore a promising but undervalued historical property just south of Nevada’s major gold region.

“A lot of the big guys are saying gold will go to a new high, and I agree,” explains Barrian Mining’s CEO, Max Sali. “When people realize what is going on and they turn to gold, we’ll be there first. We are a new story, an aggressive younger team that has gone out, raised money, and drilled good holes. It’s time to work hard and prove to people this is a forgotten sector.”

Katusa’s sentiment towards gold is in line with Sali, as he notes that gold is one of the most stable assets available. This isn’t surprising as gold has also been around for over 6,000 years, which means that it shouldn’t be taken for granted — it’s been used as a form of currency for centuries. Even as early as 3,100 BC, there is evidence of a gold-to-silver ratio in the code of Menes, [who was] the founder of the first Egyptian dynasty.

So, when it comes to Barrian’s projects, after searching for undervalued properties with a focus on finding the right rock formations in a stable jurisdiction, the company acquired an option on the Bolo property this spring. The property dates back to the 1800s and several companies have conducted limited but fruitless exploration for gold on the site over the last few decades.

Barrian used their own unique approach to the property, conducting a modest $500,000 precision drilling project on the property over the summer. They used modern technologies and mapping techniques to determine the most promising areas to focus on and drilled to 200 m vertical depth, which is significantly deeper than previous drilling on the property. In fact, a new discovery of high-grade gold oxide was made at this depth.

The initial project generated encouraging results, yielding up to 148 g of silver per tonne of rock and 3.34 g of gold per tonne.

“This summer’s drill program had some of the best results in Nevada this year, which we believe are in the top two per cent of drill results in the state in 2019,” Sali says. “If we continue to find oxide down deeper with our 2020 drill program, that would be a game-changer for the company.”

Positive drilling results set the stage for growth in 2020

Those results will initiate plans for more drilling in 2020, with exploration going to 400 m and connecting two promising mine sites – the existing silver area called Uncle Sam and a zone about 500 m to the south.

Unlike previous drilling operations on the site, Barrian drew on geophysical models of the site based on surface rock structures and drilling results, as well as shoot-inducted polarization, which sends a charge in the ground to ‘light up’ any metallic deposits in the area – which may or may not be gold.

This technology generates data that helps guide the drilling program, as it introduces further precision and minimizes the investment required to identify whether gold deposits exist and where.

“It allows you to drill less and hit more,” Sali notes.

The initial results indicate the property has the potential to generate one – three million ounces of gold, though further exploration is needed to establish its full potential.

The site is just south of existing mines in the mine-rich Carlin area and offers oxide-based gold that is easy to mine and process. More than that, the site has road access and power nearby, making mining affordable and straightforward.

“It’s an easy operation,” Sali explains. “There are no geopolitical issues, there’s no snow, we’re not removing trees, and there’s no need for helicopters.”

“As long as you play by the rules there should never be an issue. That’s the great thing about being in Nevada.”

Unlike other gold jurisdictions, Nevada has created a stable base for miners, with clear rules, strong infrastructure, and no political interference, giving miners clarity about costs, timelines, and processes. Due to this, Nevada is positioned as the number one gold-producing region and produces about 80 per cent of the gold mined in the U.S.

Sali expects that if the company’s 2020 exploration results are strong and gold prices do swing up to the $1,600 per ounce range, as predicted by TD Securities, it’s very likely a major miner would look at any Nevada property showing positive exploration results.

“If we can show more success in 2020 that would be a tremendous next phase for our company,” Sali says. “My job is to find those new ounces, build a resource and let the majors come to us.”

Sali doesn’t come from the gold industry but managed a private family office where many investments in the gold sector were made. Previously, he worked and gained valuable experience with Advantage Lithium Corp. until he started with Barrian.

Earlier this year he sat down with a former investment advisor, Brad Telfer, son of well-known mining executive, Ian Telfer, and agreed there was room for a young, agile company to go after an undervalued gold asset and put together a team that could build success.

“Not a lot of younger guys want to get into mining for gold,” Sali explains.

Now is a great time for investors to get involved with the gold market. With geopolitical tensions not coming to an end any time soon, gold is the best hedge for investors — the precious metal simply performs well in times of crisis. While the conventional idea for investors to allocate five-ten per cent of their portfolio towards gold is given, a major crisis would require investors to obtain more gold; the trick is to be able to predict a crisis ahead of time.

This is what Max Sali and his team are doing — they are watching gold trends closely, which is why they are bullish on the metal’s price heading into 2020.

With all Barrian has accomplished in the last months, investors have a lot to look forward to in the future with this company.

Stay up to date with their latest news here.